Mischief Theatre is a company that’s been hopping from strength to strength for going on eleven years, so it’s no surprise if I reveal from the off (spoilers) that A Comedy About a Bank Robbery is another magnificent feat of clowning. Slick, silly and densely packed with gags, the Mischief trio (Henry Lewis, Joanthan Sayer, Henry Shields) have really outdone themselves here. 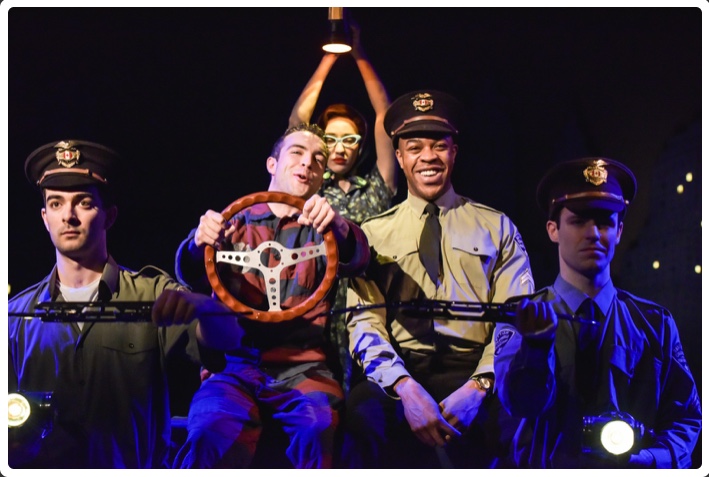 Courtesy of A Comedy About A Bank Robbery.

Whereas The Play that Goes Wrong and its brethren (destroying the scenery around Peter Pan and A Christmas Carol respectively) rely on a meta-conceit to wreak havoc, A Comedy.. bucks the trend by keeping the action strictly in-universe. Jailbird Mitch Ruscitti (Eddy Westbury) breaks out of prison to rob a Hungarian diamond from the Minneapolis bank. Setting the play in 1958 only enhances the Americana more deeply- from the strains of local radio while the house lights are up, to Amanda Ozdonmez’ beautiful wardrobe of flared skirts and peppered wigs, the stage is set for a show that fully immerses its audience, rather than pulling back the curtain.

It’s undeniable that the jokes are the crowning glory of A Comedy.. There’s no easing into the script here: once the show gets going, it’s unstoppable. We barely go two lines without a gag or burst of wordplay, in an outstandingly airtight first sequence which is bound to leave audiences gasping for breath by the five minute mark. The comic misunderstandings are relentless, that kind of silly humour which feels reminiscent of Leslie Nielsen vehicles. It’s not Nielsen who comes to mind though: the cast carry this kind of silliness off without aping any comic predecessors, a mean feat.

By committing fully to the period premise of the play, there’s a wealth of suspense to be mined as well here. Westbury has all the charm to keep Mitch an entertaining character though he cuts a truly threatening figure when the moment calls for it, especially against hapless fall guy Cooper (a delightfully ditsy performance given by David Coomber) and pickpocket protagonist Sam (Tom Hopcroft). The set pieces are largely visual, a large amount of credit of course owed to David Farley’s treasure trove of set design: offices fold out of the skyline like a Polly Pocket house realised in mega-scale. We know what to expect in a heist: scaling down wires, crawling through air vents… the production finds a way to twist each trope on its head, especially toying with the robbers’ aerial view of the office. The execution at play here really makes you marvel at the originality on offer in the creative team.

Standout performer of the night was Charlotte Duffy, whose Caprice turns the moll character archetype on its head. Rather than hanging off the arm of her male costars, Duffy breezes through scenes as a duplicitous femme fatale- all while keeping her humanity incredibly grounded. From physically exhausting comic sequences to taking on the emotional weight of protagonist in the second act, Duffy more than proves her worth in a cast of outstanding performers. 5/5

A Comedy About A Bank Robbery was shown on Tuesday 5th to Saturday 9th February 2019 at the York Theatre Royal and is currently on your. For more information on the production, visit here…