In the now infamous words of Brenda from Bristol ‘not another one!’ was exactly my reaction when hearing the season announcement that Tartuffe would be making its way to the Lyttelton stage at the National Theatre. But, you can never have too many plays by dead white guys, so off I went to Molière’s comedy classic that flirts fact with fiction and pokes fun at the bourgeoisie. 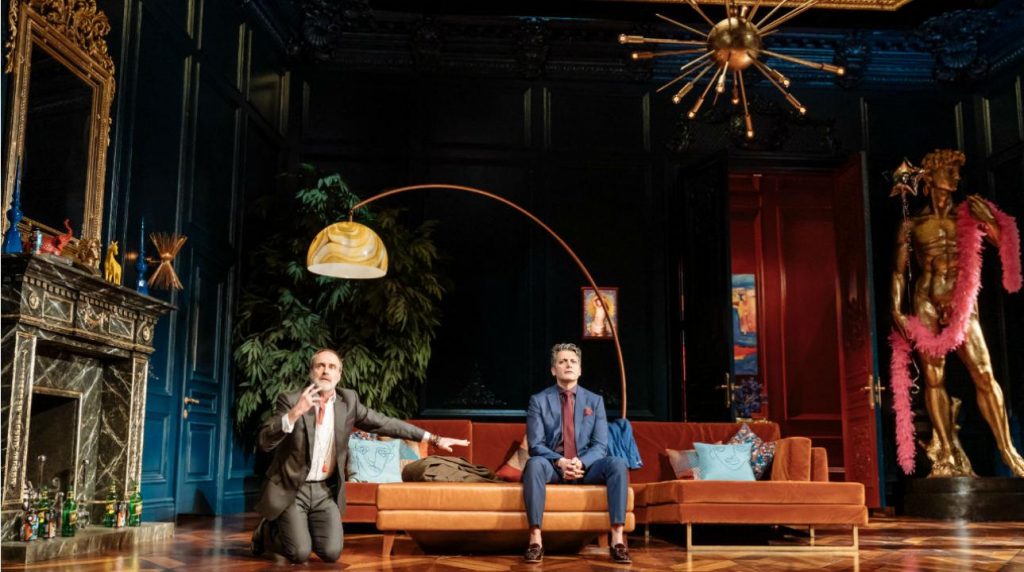 John Donnelly‘s updated script is modern, fun but definitely not risqué. Banned twice by King Louis XIV of France in the 17th Century, this revision certainly doesn’t ruffle as many feathers as it once did. Instead of 1660s Paris, our modern Tartuffe (Denis O’Hare) lands amongst the cushy, metropolitan elite of Highgate. O’Hare takes the lead with ease, adding charm and slapstick to his hippie shaman act.

Shabby Tartuffe bewitches the disillusioned Orgon (Kevin Doyle) with otherworldly chanting bullshit and coaxes the father of two into giving him board and lodging in return for instilling some much needed discipline to the dysfunctional family. This infuriates Orgon’s wife Elmeire played by the desperate yet brilliantly camply dressed Olivia Williams. Needless to say things don’t end up quite as Orgon had planned, especially considering his dirty past in dodgy political dealings.

Housemaid Dorine (Kathy Kiera Clarke) leads the hapless family into hatching a plan to expose Tartuffe as the melding trickster he really is, and some light humour ensues. Clarke is a joy to watch, particularly when exasperated by the idle daughter Mariane who is besotted by the socialist street poet Valere (Geoffrey Lumb).

Robert Jones’s gorgeous set is a banquet of luxe, mid-century modern interior design- think flatpack made.com furniture matched with period walls painted in Farrow and Ball’s most gorgeous teal blue. His work really does steal the show- we were meant to be poking fun at the ludicrously rich, but it’s so crass to make fun of people who have such impeccable taste!

For a play about finding hope in falsehoods you’d think there would be something appropriately sharp to say, especially considering this being the third major Tartuffe revival in the past 18 months. Donnelly’s pallid ending really butchers the flow of his writing. Orgon cries ‘I want things to be as they were when I was young’, a clutching attempt at making the piece seem relevant.

Jokes certainly aren’t aplenty, but there are ones that do land well like ‘the benefits of advancing years is not give two shits’. In the final verse the stage tilts, sliding the family across the parquet floor, a loose metaphor to symbolise how Tartuffe’s existence has flipped their lives upside down forever. But this piece is far from being as politically punchy as it thinks it is, in fact it’s a muddle of underdeveloped characters and lacklustre meandering. If only the trickster Tartuffe had a few more tricks up his sleeve.

Tartuffe is currently showing until Tuesday 30th April 2019 at the National Theatre. To find out more about the production, visit here…