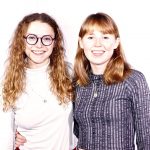 It can so often feel that those that have gone before us wouldn’t have at all understood what perhaps we’re going through now, and vice versa. It can so often feel that historical greats, are in fact so great, that the normal day to day wouldn’t have phased them at all. However, what history books tend to leave out is the fact that these were normal people, just like us, who just so happened to change the face of our history. Cue Helena Westerman and Caroline Simonsen’s ‘Galvanise’; a show connecting the lives of three modern day teens and influential female historical figures. Ahead of this year’s Vault Festival, both Helena and Caroline talk about working together, integrating animation and following their debut hit show ‘An Act of Kindness’.

Hi Helena and Caroline, you’re show Galvanise will take part in this year’s Vault Festival from the 27thFeb to 3rd Mar. How are you feeling ahead of the show?

Caroline and Helena: We’re really excited to put on our second show, it’s way more ambitious than the first one so we’re having a great time playing with new mediums, and working with a much bigger team. We’ve collected a great bunch of female creatives;  there are 9 of us in total working on the show, and each brings something really special. We feel very lucky!

Galvanise explores the connection between historical female figures and the lives of three school girls in the modern day. What inspired you both to produce a show on this?

Caroline and Helena: We both feel passionate about portraying female friendships on stage. It’s an incredible bond that isn’t necessarily given the stage time it should. The way women interact with one another is so interesting to us, which is why we started thinking about how women relate to past women, and how their stories can reflect our own. At the moment there is a growing consciousness to give women space and time to be heard, and we think that should include not only women who are alive today but the women who have lived before us.

Helena, this is your second play, having written An Act of Kindness which received a lot of acclaim. How did you approach writing Galvanise?

Helena: In quite a similar way to An Act Of Kindness really. I started writing lots of random bits of dialogue between three young female characters, and as I wrote, the individual voices started forming. I’ve got a whole file of random conversations on my computer, none of which have gone into the play, but it really helped me shape Lakshana, Shanay and Jess. Writing Galvanise was A LOT harder than An Act Of Kindness, I really did feel that ‘second album’ pressure. There’s been about 3 big redrafts of the play, and I’m sure there will be more post VAULT Festival.

How have you both worked together to produce the show?

Caroline and Helena: When we first met in 2016, we had four weeks to put on a show so we quickly learnt how to work together and now in our third year of running Rascal Theatre, we finish each other’s sandwiches. Helena writes, Caroline directors and together we produce the shows. It’s very collaborative, and in general we both muck in to get things down.

The show incorporates animation, what inspired the inclusion of this?

Helena: It was watching Stardust at VAULT Festival in 2018 by Blackboard Theatre. There was the most beautiful projected animation during the show and it was watching that that made me think about how you could write animation into a script, and what it would bring having actors interact with it and it becoming a character itself. It was Diana Garcia who animated Stardust, and I’m happy to say that she is also animating Galvanise – I fangirled hard and managed to get her onboard.

Caroline: Audiences can expect full and vibrant characters you root for from the beginning – they are teenagers; messy, funny, confused, dramatic, silly. The play winds and twists as we follow them on their journeys, sometimes slipping away from reality into a world where the lives of women from all over the world, from totally different ages, blend together.  Expect tears and laughter and learning about women from history, who should be household names.

Caroline & Helena: The message of the show is hope for a positive future. We want audiences to feel empowered by the stories of the characters and people in the play and to feel included in the strength of sisterhood. It’s a sense of togetherness and mutual support we want all to feel; male, female or non-binary.

What advice would you give to any creatives looking to start up a theatre company?

Galvanise will show from Tuesday 27th until Sunday 3rd March 2019 at The Vaults as part of this year’s Vault Festival. To find out more about the show, visit here…