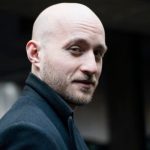 “We are part of the last generation to remember life before widespread internet access” – expresses Dean Elliott, co-founder of theatre collective New Public; a sentiment ringing true for many of us. There’s no doubt that we now live in an age of media excess; news now accessible by the click of a button, whether that be on a smartphone, laptop, TV, tablet… the list goes on. A swift generational shift, we’ll soon forget those days where we depended solely on print and TV to find out the latest global goings on, a time where we could escape the media at our own choosing. Dean talks to us about the ‘relentless media machine’ as New Public prepare to perform their topical show ‘White Noise’ at this year’s Vault Festival!

Hi Dean, New Public will be performing ‘White Noise’ at this year’s Vault Festival on Friday 22nd and Saturday 23rd Feb. How are you feeling ahead of the show?

We are feeling really excited to share our work with the VAULT Festival audience! We are entering the final days of rehearsals and things are really clicking into place.

‘White Noise’ is a satirical piece delving into the ‘relentless media machine’ – why focus on this topic?

When we first began discussing potential show themes, the isolating effects of media were a common concern for the whole company. I think that’s a generational preoccupation, and it’s probably significant that we are part of the last generation to remember life before widespread internet access.

As we’ve developed ‘White Noise’ we’ve discovered that our key question seems to be around constructed identities and the way in which media platforms heighten and magnify those identities, to an extreme extent in many cases. We see this every day on social media, in the news and in public debate. People seem to quickly take on very inflexible standpoints, not necessarily just within politics but in many areas of life. Media platforms of all kinds demand that we define ourselves and I think that’s damaging in more ways than we understand. In a sense they’re a prison, fuelled by an insatiable drive for more clicks. I suppose this show confronts the audience with an ugly aspect of ourselves that media platforms seem to bring to the fore.

Simply put, I suppose our main question is whether a public profile is a mask that eats the face – and we explore that one quite literally!

The show is devised and written by yourself, Christopher Adams, Stefanie Bruckner, Tom Kelsey, Jo Moss and Katariina Taam. How have you collaborated to bring ‘White Noise’ to life?

We are all graduates of the MA theatre Lab course at RADA so we all have a background in devising and share a common theatrical language. With our first show ‘Lucid’ we established a process that involved sharing individual propositions based on the theme of dreams that we then worked on as a group. Over time we gather material that can be combined in exciting ways and then structured, we’ve worked the same way on ‘White Noise’.

Our director Simona Gonella, who is a real mentor for us, has helped guide this wealth of material into something cohesive and satisfying for an audience.

We also all have our own individual performance backgrounds and specialities that means we draw from a range of influences; someone might bring in a song, a piece of choreography, some text, a video clip or some kind of performance style, and that means there’s always something new in the mix that we can build on. We’ve brought on Christopher Adams for this show, as well as being a fantastic performer he adds a great directorial eye, a musical panache and unbelievable knack for excel spreadsheets.

We’ve also got sound designer Julian Starr and a digital/projection designer Shankho Chaudhuri as collaborators and they bring plenty of their own ideas as well as a whole load of invaluable technical know-how.

The show incorporates physical theatre and projection to explore the topic of media excess. What inspired you to explore these themes via these theatre forms?

One of our core beliefs as a company is that form should reflect content so it seemed a no-brainer that a show about media, and the overwhelming excess of technological media in everyday life, should contain some level of technology. I guess we also want the show to replicate the experience of living in this environment, with that same level of constant sensory stimulation through sound and images.

Having said that our physical style provides a fundamental counterpoint: juxtaposing the ethereality of that tech aesthetic with the visceral use of our bodies on stage. This creates a really striking contrast and allows us to explore these ideas in a simple and immediate way.

‘White Noise’ is New Public’s second show, having devised ‘Lucid’ which received a positive reception. Was your process similar in terms of how you created both ‘Lucid’ and ‘White Noise’?

In some senses, the process of bringing in stimulus and trying things out as a group remains. But there are plenty of differences: working from characters (all inspired by well-known public figures), having a director and a bigger team present, and having text which we didn’t have for ‘Lucid’. I suppose we’re also on more complex ground as we’re dealing with contemporary themes, navigating that has been one of the big challenges. But it’s required us to figure out what exactly we want to say with ‘White Noise’.

There’s also the technological element and working out how best to include that in the process.  I’d say, although the process has felt different along the way, the similarities to our journey with ‘Lucid’ are much clearer in hindsight.

Have you all learned anything new in regards to the theatre making process?

This has been our first taste of pulling together rehearsal rooms in London, I think we’ve rehearsed in over ten different spaces. That’s been a bit of a nightmare but Stefanie has been our secret weapon, she’s done a stellar job finding spaces. At least it’s kept things fresh I suppose!

I feel like in every devising process you end up relearning the same lessons all over again, going through the same struggles and encountering the same old obstacles, it just takes less and less time to remember the answers.

I think for us it comes down to trusting ourselves, trusting the process and having the right attitude. With a bit of perseverance, the work always finds its way.

Are there any plans to perform the show beyond the festival?

We would love for ‘White Noise’ to have a life beyond VAULT, we are already in discussion with venues so fingers crossed!

What advice would you give to anyone looking to start up a theatre company?

We’ve been a company for about two years, so take our advice with that in mind.

The first thing is to start, apply for a festival, book a venue, have a commitment lined up that you haven’t got a choice not to fulfil. It’s the best motivator.

When you start it means a whole load of heavy lifting and I mean that literally as well as figuratively: sourcing and making costume, props, finding space, sourcing finance etc before you even get into the rehearsal room. It’s draining, but you cannot put a price on ownership of your own work, and being involved in every area. Savour it, you learn so much and it also ensures quality. When you are in a position to have those jobs taken off your hands you will soon find that no-one else has the same attention to detail, unless you give them good reason to be invested in your work.

New Public are a democratic company, there’s 5 of us and we take our decisions together, we also share and delegate tasks together. Making theatre off your own back is stressful, having others to fall back on and take on the load when you can’t manage it is priceless. We depend on each other and it pushes us forward. We do have our differences but we’re lucky to share a common training and theatre language and that is our backbone and has given us a head start.

But the best advice: just start, that applies to the rehearsal room too, you can theorise and discuss for hours, and believe me we do, but 5 minutes of trying things out can reveal more than days of discussion. You just have to trust your instincts and discover by doing.

until 17th March at The