Jesus Hopped the ‘A’ Train @ The Young Vic Theatre Review

Jesus Hopped the ‘A’ Train delivers a compelling portrayal of faith, religion and morality. Kate Hewitt’s adaptation of Stephen Adly Guirgis’s dark comedy strikes a brilliant tonal balance of humour and emotional weight. It follows the literal and internal trials of Angel Cruz (Ukweli Roach) and the characters that he meets during his incarceration awaiting trial. The humour lands well, natural and unforced, often the room erupts in laughter; yet Hewitt’s adaptation truly shines in its more intimate moments. The characters engage in profound questioning of a higher power whilst battling their own inner turmoil, fighting demons conjured by their past actions and whether faith can relieve them of their own culpability. 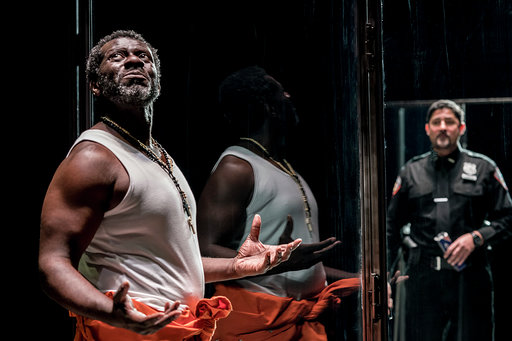 Magda Willi’s set is clinical, sparse and colourless, yet this blandness is what makes it exceedingly potent. A long marble strip of stage is separated by moving glass doors which double up as chiefly a prison cell or yard. The door’s movements also mirror the panics and fluctuations of the character’s emotions and feelings, Willi herself explains how we are ‘experiencing the physical compression and decompression within the characters, and the space as well’. The simplicity of the set creates a cold and lifeless limbo in which the characters inhabit to ruminate, contemplate and become disorientated in their own thoughts and convictions.

The cast of five deliver a strong and consistent performance, each character contrasting in demeanour and status, yet tied together questioning religion, morality, faith, and more. However, a particular stand-out is Oberon K.A. Adjepong as Lucius Jenkins. Friendly yet ominous, the audience sways with Adjepong laughing one moment then stunned in silence within the same breath, he holds the auditorium in anticipation of how we should react and feel toward him. Ukwell Roach’s Angel Cruz is also confidently assured in one moment and pitifully distraught the next, thoroughly dynamic.

From start to finish, Hewitt’s adaptation hits every mark it aims for, hysterical, cruel and highly thought provoking. 5/5

Jesus Hopped the ‘A’ Train is currently showing until Saturday 30th March 2019 at the Young Vic Theatre. To find out more about the production, visit here…