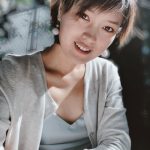 Relationships aren’t easy, particularly long distances ones. Trying to maintain a sense of connection is a tough ask, for some, lack of contact works, for others not so much; it’s dependent on the circumstances of the couple. We also have our own take on what it means to ‘belong’, a human need intrinsically and extrinsically fulfilled, or perhaps not. A state some finally find peace with, for some, something they continually search for. This also feeding into how we perceive our ‘cultural identities’, a factor shaping our daily experiences and how we view the world. Qianqian Chen’s non-linear narrative Safety Net explores these facets of daily life, a complex narrative presenting a series of ideas, created by a US and UK based collective of artists. Qianqian discussed further about the show’s UK premiere.

Hi Qianqian, Reallusion Theatre’s show Safety Net will be showing at the Etcetera Theatre from the 22nd to the 27th April. How are you feeling ahead of the show?

It is a really special play to me. I finished writing it in the summer of 2016. That was the year I moved from the U.S. back to my home country China. I thought Safety Net would never find its audience because it was for people like me, the ones in between two cultures. Even the language of the show is a combination of Chinese and English. Direct translation won’t work. Three years later, I moved to London and was able to finally see Safety Net on stage. This play is not out-dated yet, and it finds its audience here. It feels like a miracle for me.

The show explores long distance relationships, cultural identity and belonging. What drew you to explore these themes?

I struggle with sense of belongings a lot since I was a kid. I felt that there were a lot of circles in your social life that were define by unspeakable rules. I have never been able to fit myself into a circle. There was a time where I thought I fit in, and then I was thrown out. Sometimes you think your family, your lover would be your safety net, but that’s not necessarily true. I was questioning what exactly I was looking for from the relationships I have. That was the moment this play came around.

Reallusion Theatre is a London based Asian theatre arts company creating works for Asian communities. Your previous works have seen you work in China and the US. What have responses been to your previous works there?

Age of Enlightenment is a play I wrote and was premiered in Los Angeles in 2015. It is set in a world which man can get pregnant instead of woman. The play was written in Chinese and was meant for Chinese audiences. The audience found it quite inspiring in terms of the gender issue the play touched upon. My later work, Thunderstorm (re)making (2016, New York, US), Doll Factory (2016,2017, Hangzhou, China), Rabbit Hole (2017,Hangzhou, China) are devised physical theatre work all wearing strong feminism lens. I have also worked with  LGBTQ group in China to write the Ethnotheatre work On Air (2018, Hangzhou, China). I have been creating theatre work mainly to raise social awareness of Chinese communities. Safety Net is written under a female narrative but there is no strong statement in it. It was more like a “dot, dot, dot” play.

Safety Net will witness a collaboration with Asian artists from China and the UK. How have the team worked together to create the show?

In the beginning, we were looking for local designers to work with. Later, we were introduced to a Chinese stenographer who really loved the play after reading the script. She studied in London before and just moved back to China. She can relate to the character a lot. Later, we started to work through video meetings. Many Chinese theatre makers join this show because they were impressed by the script. I was really grateful about it.

It is a little bit confusing at first then I hope you enjoy the drive.

There will be different languages switching, non-linear narrative, sharp flashbacks, poems and dreams.

I wouldn’t say the show was written only for Asian communities. As I said before, it was for anyone who feels “in-between”. I hope audience will be able to resonate with it and find it their story as well.

The best play is the one you haven’t written yet. So I would say keep writing so you can write better ones. Writing from your own experience can be traumatising sometimes. Make sure you are able to handle it.

Safety Net will be showing from Monday 22nd until Saturday 27th April 2019. For more information on the production, visit here…

« Previous post
Video and Projection Designer Joshua Pharo talks about working on China Plate Theatre’s show ‘The Shape of Pain’
Next post »
Subscribe to our newsletter!