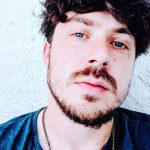 The Shape of Pain made its debut at the Edinburgh Festival Fringe, and went on to win a Fringe First Award. Since then, the show has received critical acclaim for its unique capturing of Director Rachel Bagshaw’s personal experiences of living with Complex Regional Pain Syndrome (CRPS). A crucial piece of theatre showcasing just how powerful the integration of technology can be, the show is a culmination of carefully crafted sound, lighting and video and projection design. Ahead of the show’s return to Wilton’s Music Hall before embarking on a UK tour, Theatre & Technology Award winning Video and Projection Designer Joshua Pharo discusses further about the show’s collaborative creative process.

Hi Joshua, The Shape of Pain will return first of all at Wilton’s Music Hall from the 19th to 23rd March before going on tour. How are you feeling ahead of the return?

Excited! It’s really exciting that the show is going to be seen by new and returning audiences, it’s always a lovely feeling when a show you’re really proud of making gets to have a longer life. Also because it’s a show that so many people talk to me about, it’s lovely to revisit a project that I started making over two years ago. This time round, we have had some time to refine how the show fits together and also the added challenge of making a very technical show, fit the beauty that is Wilton’s Music Hall. I’m excited for the two worlds to collide.

The Shape of Pain is ‘a show about a love affair seen through the eyes of someone with Complex Regional Pain Syndrome’. What in particular drew you to take part in this project?

I think many things, but the biggest thing that attracted me was just how brilliantly knotty the subject is and how difficult it is to articulate- both the pain and on a wider level the complexity of having a relationship. It felt like Chris and Rachel had woven together this really articulate way of trying to describe both together. Secondly, Rachel set me the exhilarating task of trying to articulate how chronic pain feels using my visual language of light, colour and texture – it was a dream project for me to really explore my art form. Thirdly, the sound design and composition is by Melanie Wilson, and it felt really important that the sound and visual language sung together – her work is astonishingly rich and complex to respond to visually- that was hugely exciting.

The show is created by Chris Thorpe and Rachel Bagshaw of China Plate and is based around Rachel’s experiences with Complex Regional Pain Syndrome. How have you collaborated to bring to the stage this multi-sensory experience?

The show is very unique, in that at the top of the show, it is explicitly says that the words, sound, light and projection are all trying to express the same thing throughout- and that no element is necessarily more dominant that the other. This describes perfectly the process of collaboration – at all times during the process, it was vital that my design was talking to every other element-sometimes singing harmoniously- other times a full blow shouting match- but that there is always a dialogue- at least that’s what we aimed for. I collaborated with the whole team to develop the visual language of the show- over many months of testing, rehearsals and performances. A very unusual thing about my relationship with Rachel is that we were trying to create a visual language that described her pain- but in turn her syndrome would react very strongly- so in effect I was literally recreating the pain for Rachel- a collaborative relationship I have never experienced before.

How did you approach creating the video and projection, as well as lighting design for the show?

The creative captioning was the starting point for the whole design, even including the lighting. The show is majority lit using projection- a quality we were very keen to explore – so that everything felt of the same material, which was fluid, changeable and fragile. The design of the text for the captioning was a kind of framing for every scene- how it created shapes and boxes in which to contain the character. From this we also developed a colour and texture response to each scene – Eventually culminating in the text, colour and texture all competing to be heard the most. The process was pretty experimental, as I had never entirely lit a show in this way before- majority projectors- so the first time me teched it was really quite nerve racking- but there was something quite magical about it.

From being a part of this important production, have you learned anything new from it?

So many things, as a human – I have learnt so much about what life is like with CRPS, particularly because for Rachel my design triggers really intense pain responses – meaning that quite often in tech, we would have to work on sequences with her away from the space. I have also learnt that its always worth following your instincts and taking a leap – the techniques I used to make the show, many are the first time I put them all together- which was a leap of faith in myself, but I am very glad that I was with a team who were so supportive and collaborative.

I’d describe it as a meditative roller coaster. It’s very warm, gentle and inviting – but it really takes you to some very intense and articulate places that I think we all recognise – whether we are connected to CRPS or not. On top of that I think we have managed to create a real journey for the designs – the light, video and caption design is hopefully really absorbing and above all exciting for an audience who haven’t experienced creative captioning before.

I’d love an audience to have had a really visceral experience and hope that that the design has expressed something for them. I also hope that they have been on a journey, with a fellow human who is trying to articulate a quite extraordinary human experience.

What advice would you give to aspiring lighting, and video and projection designers?

To think of yourself as an artist. I know for myself, that light and projection is how I think and part of the way I express myself- so have faith in it as a medium to be complex, emotional and nuanced. For me, I am hugely privileged to get to work with light as my material, it fascinates me every day. Also, always try and do something you’ve not tried before as well as reinvent something you always love using. Lastly, for me a design Pinterest board is my life line – always spend time with that, you never know what ideas it might create.

The Shape of the Pain opens at Wilton’s Music Hall on 19thMarch before a UK tour until 5thApril. For full dates and further information, please visit here…