Anne Washburn’s theatrical adaptation of The Twilight Zone does not try to disguise itself from the original TV show’s iconic personality. The play is quirky, creepy, and funny as it fully embraces the over the top nature of its origins which inspired a plethora of recognisable Sci-Fi tropes. 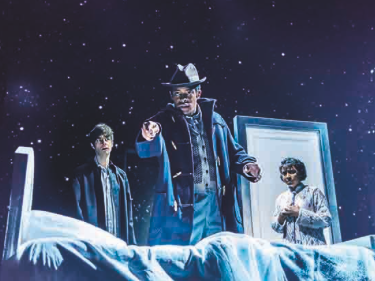 Under Richard Jones’ direction, the cast dart and weave between different narratives with each performer multi-roling to play numerous characters. We do not cycle through the narratives in a linear fashion, we chop and change between different episodes from the original show with comical transitions that harken back to the TV show’s memorable opening sequence. However, It can be disjointed and the pacing varies quite drastically, some scenes last a few minutes, another almost fifteen. I find myself to be more invested in the scenes of length, rather than some of the fast-paced alternatives. One in particular is a lengthy depiction of Cold-War America, a fight for survival under nuclear threat that highlights both class and racial tensions; issues that are still very much prevalent in America’s society today. The tension is masterfully crafted in this scene, with an all round acting performance that is chillingly real.

The rest of the play has a tonal balance of the unknown and humour. The comedy lands well, from an alien with an enlarged head and sparkling platforms to cigarettes appearing in the character’s hands (a head-nod to creator and narrator Rod Serling), the play does not shy away from the cheesiness of its source content. The magic-tricks and illusions are also highly amusing, some entertaining and some genuinely baffling as to how it is pulled off.

The set, a starry backdrop with a simple changing set, from the more naturalistic of a diner to the more absurd of inside the realm of dreams, it is simple, clean and effective. The sound design also deserves mentioning, Sarah Angliss and Christopher Strutt’s soundscape is highly effective as screams reverberate around the intimate theatre, many sweeping from left to right behind the audience’s ears from the well placed sound system.

The play is good fun, fan-service galore, with a cast of individuals that make you laugh, question the unknown and sometimes touch on something a little sincere, I just had hoped it would touch on it a little more. 3/5

The Twilight Zone is currently showing until Saturday 16th March 2019 at the Ambassadors Theatre. To find out more about the production, visit here…

To purchase tickets to London’s most popular West End shows, visit our friends at the London Box Office here…