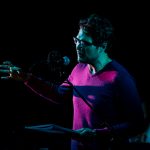 Just recently the internet celebrated its 30th Birthday; a phenomenon that has revolutionised the way in which we share and consume information. No longer are we solely dependent on the voices of mainstream tabloids and broadsheets; we’re now in control of where we consume our information from, whether that be from forums, video sharing sites, blogs or websites. With this growing phenomena of information sharing, we ourselves are capable of airing our perspectives and opinions to a mass audience in a matter of seconds; this now creating space for all sorts of voices to perpetuate their agendas. Ahead of the return of Scotsman’s Fringe First Award 2017 ‘The Believers Are But Brothers’, playwright Javaad Alipoor discusses the show’s addressing of this phenomena. An online world we once celebrated the beginnings of, now a Wild West of opinions ranging from the tame to the absolute inflammatory.

After the success of the show’s run in Edinburgh (congratulations on Scotsman Fringe First Award win!), how are you feeling about bringing the show back in April?

We’re really excited to start touring it in the UK again.  At the back end of last year the show began the first part of its international life; what that showed us was that these issues, extreme politics, toxic masculinity, the way the internet can help to send people further down dead ends , are things that people care about internationally, and that are changing all of our worlds.  Wherever we do the show we feel like we create a community of people who want to engage with this stuff, and work out what we can all do about it.

The show ‘explores the smoke and mirrors world of online extremism, anonymity and hate speech’, what drew you to create a piece focused on this?

This is part of a trilogy- or at least a longer body of work- that we are planning on creating about how politics and society are changing as the 21st century really kicks in.  I was struck a few years ago, when I started writing this play- how much the discussion about the internet had changed- moving from that moment in 2011 where we were all excited about the emancipatory power of social media after the arab spring, to a very different moment.  A moment was the rise of ISIS and the way that social media had fed into the lies and propaganda around the Brexit vote and the Trump campaign seemed to be the sine qua non of the political effects of social media.  At the same time, over the last couple of years, the ‘me too’ movement has blown up from social media so the relationship between the online world and “radical” politics (Whether in the positive or negative senses of the word radical!) seems like an important thing to think about.

‘The Believers Are But Brothers’ debuted in 2017, 2 years on and the show is just as topical, if not more so. How has this effected (your approach to) the show?

We have made a handful of tiny changes to the show- mainly as some of the stuff that we perhaps felt like we were introducing people to, for instance the “incel” movement, have become part of mainstream news coverage.  But the heart of the show is still the same.  I suppose what has changed most is the urgency of the conversations we are having around it.

The show tells the story of three young men, two muslims from the UK and a white boy from the US who get caught up in the far right and so called “Islamic Extremism”, as well as my story of trying to talk to young men like this on social media.  It’s a mix of story telling, projection and a live whatsapp group, with a few twists along the way.

Your shows are created from workshops and discussions had ‘with communities that don’t usually engage with mainstream theatre’. Was this how the creation process for the show began? What did you learn from these conversations?

To be honest, this play started off in a very different place.  The most important thing for me was the way this play talks in passing, but quite centrally, about the war in Syria.  When I was first developing it, I performed some early pieces from it in workshops with Syrian refugees in Bradford.  As someone from a middle eastern immigrant background myself it felt really important to have that reality check on the work I was putting together.

Tech is a crucial element of the show, utilising video and projection, as well as inviting audience members to join a WhatsApp group. How have you approached integrating the tech aspects?

About a third of the story is told over that WhatsApp group.  Really the approach was about wanting the audience to feel connected through theatrical form to the ideas the show was about- so given that social media is so complicit in radicalisation and extremism, it feels important to make that part of audience experience.

I don’t think the job of an artist is to educate or to preach.  I think a lot of educated modern audience already know what’s going on in the world.  I hope that this work helps to provoke, to broaden the conversation, to entertain and to make people feel implicated in and curious about a world that they previously just saw out of the corner of their eyes.

The Believers Are But Brothers will be showing from Wednesday 3rd until Saturday 6th April 2019 at the Stratford Circus Arts Centre. For more information on the production, visit here…