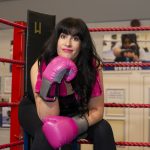 London 2012 marked a landmark moment within the boxing world; it would mark the first time women could compete in three boxing events consisting of the flyweight, lightweight and middleweight competitions. Nicola Adams would go on to become a national treasure and Olympic champion of the flyweight division, marking her as the face of a trailblazing movement. A world dominated by men, moments such as this continue to dismantle the idea that only men can compete. Drawing from her experiences within the boxing world, actor and writer Libby Liburd discusses her latest show Fighter – an exploration of discrimination faced by women and their literal and metaphorical fight to be taken seriously.

I’m off the chart excited! Creating new work is an experience that involves feeling equal measures of terror, joy and sheer hard work. This show has that in bucket loads. I’m training hard and I’m putting the work in. The terror and joy looks after itself.

The show is inspired ‘by the pioneering British female boxers that fought for their right to fight’ – this being prevalent in 2012 with the introduction of female boxing within the Olympic Games. What inspired you to explore this?

I boxed myself, this was a bit before the 2012 Olympics, and I just fell in love with it. I was never the greatest boxer but I had fights and those experiences gave me so much. Boxing was hard for so many reasons: the mental and physical strength you need when you’re boxing, training is second to none and, of course, as a woman you have the addition of being totally outnumbered in a male-dominated sport. But I loved it and I still do. When I started boxing, I wondered why there were so few women involved. I knew I loved boxing, but I also knew that women boxers were at best considered a novelty and at worst, were suffering downright discrimination. In my work I like to explore the root causes and reasons for things so when I was creating FIGHTER, I knew I was going to be doing some pretty in-depth research. I’m always looking for the reason why things are how they are, I don’t want to just accept the status quo.

You’ve worked alongside Director Julie Addy to create the show. How have you both worked together to do so?

Julie and I worked together on my plays MUVVAHOOD and TEMPORARY.We work very collaboratively: I’ll have an idea and we’ll start from there. I write from lived experience – I take my personal experiences as a starting point, then layer on top of that all the research. This means I’m very close to the material. Julie, by contrast, rarely has direct experience of the subject matter – she knew nothing about boxing before we started working on FIGHTER. And that, for us, is the winning formula. Sometimes when you are so close to the material you forget that what might be obvious to you is not obvious to others. With this show, I’d be blabbering on about jab, cross, hook and Julie would always say, ‘what language are you even talking?’ Having those conversations challenges the work. Neither of us want to make work that alienates audience members that don’t have direct experience of the subject but equally we don’t want to make something that loses its authenticity. With FIGHTER, I’m proud that our collaboration has created something that will speak both to boxers and boxing fans as well as to people who have no idea about boxing at all.

Practically, we really immerse ourselves in the process – we go through the research together, we go through multiple script drafts, do RnD in the room, character development, work in progress/scratch showings, go to boxing gyms, whatever we need to do to arrive at a show that’s performance ready. It’s a long process but because Julie and I have the same work ethic and the same perfectionist tendencies we never lose the excitement for what we’re making.

The performance will include young boxers selected from Fight for Peace’s Newham Academy to create an authentic boxing environment. How has this helped shape the show?

As I say, I make work that’s authentic and from lived experience. I want to invite audiences into a world that isn’t just a traditional theatre construction of a world. Our boxers are all actual boxers – they’re not acting being boxers – they all have that experience of training hard, being in the gym. They’re all going to be actually training onstage, giving that real boxing gym feeling. They’re an absolutely vital and integral part of the show, and their involvement is what will make FIGHTER a truly special experience.

The show is pioneering in that it offers a free crèche during the 2pm performance on the 27th. What inspired this beneficial service? How can parents book?

I’m a single mum and though my child is a young adult now, I still remember the endless barriers I faced when he was younger. My main barrier to being able to access theatre was always childcare. If I wanted to see a show, I either had to go and see a kid’s show and take him with me or I had to arrange a babysitter which was a mission! It did my head in and basically meant I didn’t see most of the shows I wanted to see. I wanted to offer a little something that would help to overcome the childcare barrier. I offered a creche service with some of my previous performances of MUVVAHOOD and it was so successful it was a no brainer to continue to that offer. If parents’ book on the Stratford Circus website for the 2pm Saturday show on 27th April, they can add the creche place to their basket as part of the online booking system. Or you can ring the Box Office and arrange from there.

Expect a show full of heart! It’s essentially a story about resilience, not giving up and change coming through challenge. Yes, it’s about boxing but there’s so much more to it. It’ll be loud, funny, uplifting, relatable and celebratory.

I’d love them to come out of the theatre and want to take up boxing!

Make the work you want to see. There’s no point making work that you think is fashionable, making what you think will sell, or making another version of what’s already out there. Your perspective and your voice are unique so work with it, not against it. Get a good team of people in your corner. Making work is rewarding but hard – it’s blood, sweat and tears, it’s a proper rollercoaster, so you have to start from the place of really, really caring and having people around you that really, really care too; that will see you through the tough times. When you can step back and look at something you’ve made and truly say, if I hadn’t made this, I’d still want to see it. That for me must always be the goal.

Fighter will show at Stratford Circus Arts Centre from Thursday 25th until Saturday 27th April 2019. To find out more about the production, visit here…