Packed full of classical charm and dynamic vocal artistry, Macbeth takes audiences on a journey through Scotland’s civil war, yet adding the rich flavour of Verdi’s operatic genius. The English Touring Opera, conducted in this performance by Gerry Cornelius, incorporates the bloodthirsty and murderous Shakespearean favourite and balances it alongside the bellowing yet crisp tones sang by the vocalists. 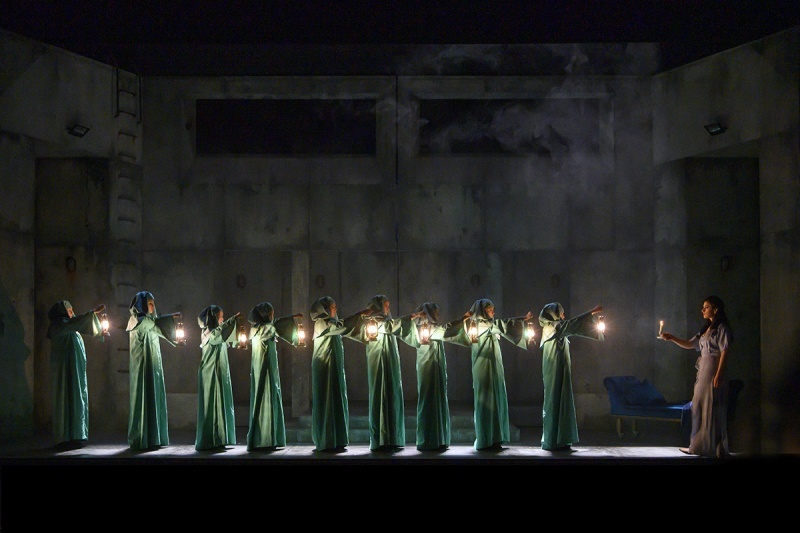 We start the piece at the end of another tiresome battle, fought by Macbeth to defend King Duncan’s throne, and the sinister chanting of the witches echoing the space with their harrowing melodies. Witches, not dressed in the way you might imagine, but as ‘nun like’ figures in turquoise gowns, stalking the space and spreading future speculations on what Macbeth’s life might bring. With friend banquo at his side he returns, met by a celebratory welcome, yet conjuring up his plans for dominance over the Scottish crown, and learning that friends can quickly become sworn enemies. Lady Macbeth is of course at Macbeth’s side, seducing and taunting him with her birdlike voice, aiding in the many killings and taking great pleasure in becoming queen through violent acts and devilish lies. However, our protagonists eventually meet their comeuppance and are haunted by ghosts seething for vengeance, and armies marching upon them led by foes that they thought had been dealt with in past sinful acts. Witches predictions proved right, Scotland is reborn, freedom reigns supreme and the old Thane of Cawdor is nothing but a distant memory.

Grant Doyle, demands a great presence on stage and drives his smooth and delicately soft voice easily through the impassioned and emotional words of Macbeth, however Doyle demonstrates he can have a fiery bite should someone turn upon him in character. Lady Macbeth, played by Madeleine Pierard, compliments her on stage husband well throughout the performance, creating dynamic melodies together and giving off heated and emblazoned chemistry in bucket loads. Frankly, the whole cast seem to live and breathe the high energy created by the orchestra, and the two marry hand in hand, which showcases Giuseppe Verdi at his best.

If you find yourself lacking in the funds to afford a trip to the Austrian capital to capture the Viennese opera why not attend the next best thing, and with a space as eye catching at York Theatre Royal, you will be transported to a distant musical land, whether you want to or not. So grab that frock, polish those shoes and let yourself be immersed in a classical masterclass which is sure to leave you chirping all the way home. 4/5

Macbeth was shown from Thursday 25th until Friday 26th March 2019 at the York Theatre Royal. The show is currently on tour, next up at the Cambridge Arts Theatre on Tuesday 2nd April 2019. To find out more about the production, visit here…