Toast @ The Other Palace Review

Henry Filloux-Bennett has seamlessly reworked Nigel Slater’s popular autobiography for the stage, Toast. A charming, endearing, yet equally sorrowful tale of a young boy growing up with a developing passion for all things food in 1960s suburban England. Giles Cooper’s Nigel first exhibits a devotion for cookery in his mother’s kitchen. His childhood excitement fills the auditorium, enthusiastically narrating as he bakes wonderfully British jam tarts. He learns eagerly at his mother’s side (Lizzie Muncey); content in his own homebaked edition of paradise. Sadly, in his culinary quest, life does not remain in this gleeful and happy state. Instead, it is replaced by confusion, anger and melancholy in the touching true story of Nigel Slater. 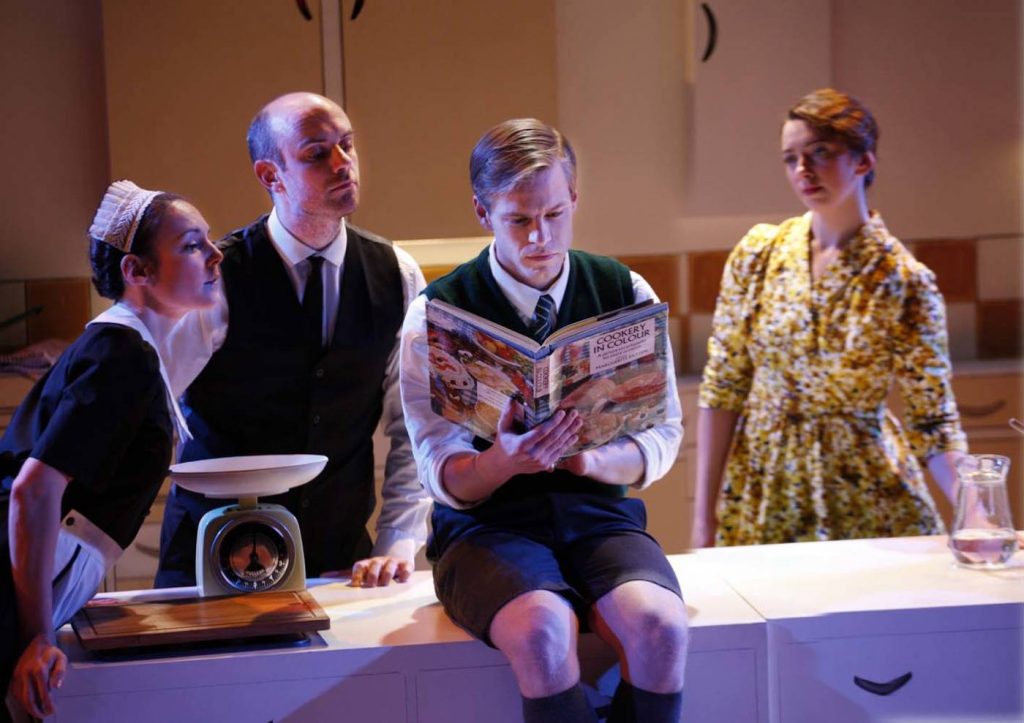 Libby Watson’s set appears externally as a simple kitchen, homely and quaint. However, it becomes far more intriguing as the play progresses. Different cupboards harbour more and more lavish cakes, fridges become doorways, and flour falls like snow from above.

Two sliding counters shift around the stage, morphing into numerous settings; simple yet very useful. They are particularly advantageous during the choreographed movement sequences throughout the play. Director and choreographer, Jonnie Riordan’s work with Frantic Assembly is clearly evident as slick physical theatre enhances the narrative. From school children bopping around scoffing sweets, to what can only be described as a ‘street-fighter’ food showdown, to an extremely touching moment between Nigel and his mother. Atop the counters, they dance, being slowly spun to ‘La Mer’ in a lamentable and foreshadowing embrace.

The cast deliver an all round impressive performance, Cooper’s portrayal of a young boy is particularly convincing. However, the limelight must go to Muncey, her ‘mum’ is truly wonderful to watch. A stirring performance that had some members of the audience in tears at points. However, many of the characters multi-role, which they do effortlessly, but it does have a reductive effect on certain crucial moments in the narrative. An important moment followed by the same actor suddenly in a contrasting manner was jarring.

An incredibly interesting feature of the production is eating along with Nigel, experiencing what he does as we venture with him. This in theory is a fantastic idea, immersing the audience further into the play, a new way of breaking the fourth wall. Yet this immersion is swiftly subverted as a cresending sea of wrappings and crinkles swallow the action on stage. Walnut Whips are held in anticipation, paper bags full of sweets are also passed around causing laughter and chatter across the Other Palace Theatre. Plates full of lemon meringue are later used too, in which one audience-goer accidentally drops a plate, provoking roaring laughter from the crowd, pulling from the dialogue completely.

Despite this, Nigel Slater’s: Toast is a well polished adaptation, witty humour twinned with some truly touching moments. 4/5

Toast is currently showing until Saturday 3rd August 2019 at The Other Palace Theatre. To find out more about the production, visit here…