What Girls Are Made Of @ The Tramway Theatre Review

Cora Bissett’s Fringe smash-hit What Girls Are Made Of has begun its Scottish tour this week with a week’s worth of shows at Tramway. This gig-style show tells the story of Bissett’s five minutes of fame back in the 90s, touring with the likes of Radiohead and Blur all before she had even turned 20. While the title shouts feminist anthem, the summary sounds a little indulgent to me. But, I could not have been more wrong. What Girls Are Made Of is an electric celebration of womanhood in an era when we have more opportunity, and inspiration, than ever. 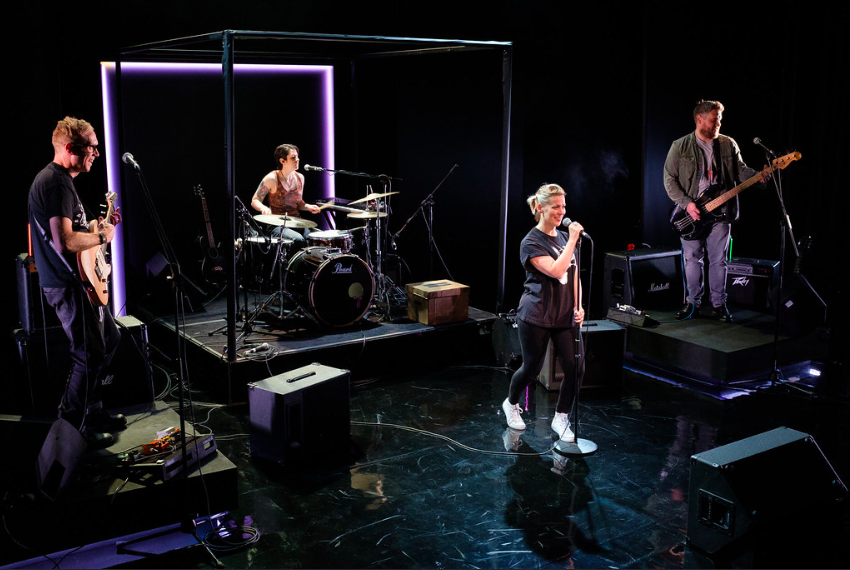 Bissett’s performance is brilliant as she flips between the present day and her teenage self. I am equally impressed by the supporting cast who play a variety of people that Bissett came into contact with, from managers to mates, each one multi-rolled with skill and depth. I am particularly impressed by Harry Ward who plays a hilarious, but at times touching, rendition of Bissett’s mother. The audience roar every time this character comes to play.

The use of music places the play within a cultural context that many of us can relate to. Performing songs from her personal hero Patti Smith, as well as the likes of Nirvana and Sultans of Ping, I know that each choice will strike a chord with each audience member at different times. This is what makes the show so far reaching, Bissett has managed to tap into a generation that is intensely sentimental, whether they’d admit it or not.

The short one-act structure means that the transition from ambitious teenager to present day feels slightly jarring. Nonetheless, the content of the latter half is of just a high standard. Exploring other themes that make a woman who she is-from love to loss and heartbreak- the pace slows only to bring you up again for the show’s upbeat and raucous finale. I find myself involuntarily whooping mid-scene as Bissett and the band perform the finale number, only to be followed by a well-deserved standing ovation.

It’s often the case that Fringe shows don’t always stand the test of time outside the context of the festival, but this will not be the case with What Girls Are Made Of. Bissett’s is a story that will relate to so many and comes in a fresh style that excites and entertains. I have such high praise for this refreshing and thoughtful show, and I look forward to what Bissett has to offer in the future. 4/5

What Girls Are Made Of was shown from Tuesday 9th until Saturday 13th April at the Tramway Theatre. To find out more about the production, visit here…

Cora Bissett, Harry Ward, Tramway Theatre, What Girls Are Made Of
15th April 2019by Theatrefullstop