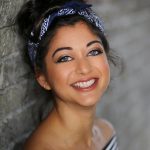 Debuting a scratch performance of The Brownie Club at Watford Palace Theatre three years ago, Circus Performer and theatre maker Jessica Andrade would go on to develop a full length version of the show at Jacksons Lane Theatre. A theatre renowned for nurturing circus based work, Jessica’s pertinent show explores the topic of racism, something the performer has found she still, as well as many of us, confront today. Formed as a way to create a safe space from ignorant comments made by teachers and fellow students whilst at school; The Brownie Club was a friendship circle giving a voice to the marginalised and ignored. Ahead of the show in May, Jessica tells us more about the show’s creative process.

Hi Jess, a full length of your show ‘The Brownie Club’ will debut at Jacksons Lane Theatre from 1st to 4th May. How are you feeling ahead of the run?

I’m feeling excited, nervous and exhausted already! Its been a long time coming with various workshops, R&D’s, meetings and rehearsals to get here.
The show ‘explores the experiences of women of colour as they choose when, where and how to respond to racism… it takes a joyful, honest and candid look at the assumptions made about people of colour, and asks: What happens when we begin with a different set of questions?’. What was it about this particular subject manner that inspired you to explore it further?
This subject is a daily occurrence because nearly everywhere I go people will make an assumption about me based on the way I look and sometimes its light and innocent, sometimes its offensive, or sometimes just ignorant. So ultimately I was like I’m gonna make a show about this! I grew up in a very white conservative part of Essex and it has changed to become more culturally diverse but I still do seem to have these conversations a lot. The Brownie Club was a friendship circle I created in primary school when my skin colour was often pointed out by teachers or students so as a form of empowerment I almost felt safer talking to my brown friends about [it]. I’ve noticed similar friendship groups throughout my life and wanted to open up the conversation to a wider audience.
The show integrates aerial circus, physical theatre and spoken word to explore the show’s themes. How have you worked with the cast and creative team to finalise the piece?
Its been a lot of trial and error, during workshops and R&D about how to use circus to explore a feeling or a visual story and mix in when to talk and when is necessary and we are still playing with them all.
You presented a scratch performance of The Brownie Club three years ago at the Watford Palace Theatre. What were responses towards the performance then?
The responses were great and really encouraging to explore the story more and the techniques used to tell them, I remember people being quite surprised by my experiences and other people just totally relating. Many of the audience hadn’t seen a South Asian woman performing aerial silks, and I don’t think its that common so I want to expose that art form really and encourage more people to try it.
How have you developed the show since?
I have done a couple more R&D’s with other performers and as a solo to focus more on the narratives and how best to communicate our voices. I have worked with different directors and dramaturgs which have helped me write a lot more. I have been inspired by more poetry and various art forms by empowered women.
The show is a co-production with Jacksons Lane. How have you collaborated to create the show?
They supported me with a residency last year and I presented my R&D there last August and got great feedback. So this year they have given me 4 weeks (including production week in the theatre with full technical and marketing support.
What can audiences expect from the show?
They can expect moments of high energy spectacle, beautiful imagery and honest real life experiences.
What would you like for audiences to take away from the show?
I want audiences to be encouraged to step outside their comfort zone, maybe try something new and open up uncomfortable conversations.
What advice would you give to circus performers and theatre makers?
To be brave enough to try their own ideas out, I had mine in my head for years and didn’t do anything about it out of fear, but actually the more I talked about it and connected with people in the right avenues, they were really encouraging and supportive.
Questions by Lucy Basaba.
The Brownie Club will show from Wednesday 1st until Saturday 4th May 2019. To find out more about the production, visit here…
There is also a crowdfunder campaign to raise money for free tickets for young people of colour and to fund workshops the company will run. To find out more about the campaign and donate, visit here…
Jacksons Lane, Jessica Andrade, The Brownie Club
15th April 2019by Theatrefullstop