Singer, Rapper and Actor Kema Sikazwe (Kema Kay) talks about his latest show ‘Shine’ to play at The Traverse, Edinburgh 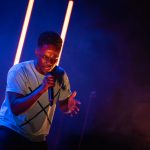 Kema Sikazwe is an actor, rapper, singer (who performs under the name Kema Kay), rising star and Live Theatre Associate Artist. He played Daniel Blake’s neighbour China, in the Ken Loach film, I, Daniel Blake. His debut show Shine is a Live Theatre production which tells his own autobiographical story through an electrifying live soundtrack and heartfelt words. Shine premiered at Live Theatre, Newcastle from Thu 2 – Sat 11 May and transfers to the Traverse Theatre in Edinburgh from Thu 16 – Sat 18 May. Find out more about his show ‘Shine’; a show looking back at his journey from Zambia to assimilating to a new life in Newcastle at 3 years old.

Hi Kema, you’ll be premiering your show Shine at the Live Theatre, Newcastle from 2nd to 11th May. How are you feeling ahead of the show?

I’m extremely nervous but excited at the same time!

‘Shine’ – which is the definition of your first name ‘explores growing up in a world that doesn’t always accept you while learning to gain self-belief’. What inspired the creation of the show?

I’ve always been telling my story through my music. I’ve always felt the need to tell this story but didn’t know how best I could, a theatre piece was perfect.

Based on your own experiences of moving from Zambia to Newcastle aged 3, Shine requires for you to look back at the process of assimilating to new surroundings. How did you find this process? Have you learned anything new about yourself from creating the show?

In rehearsals I broke down a few times. Irealised how much bottled emotion I’ve had in over the years. This show has been like therapy to me,to accept andlet go of some pain I’ve carried for years.

You’ve written both the show and the seven songs that will feature. How have you approached writing the show and songs/lyrics?

There will be a post-show talk on 7th May, what can the audience expect from this?

In the play there are a lot of questions that are left unanswered and I know people will want to know.

There will also be 2 pre-show events on 4th and 11th May showcasing local musicians and performers. How is it decided who will take part? Who will take part in the showcases?

Local artists will be performing and also some of the young people I’ve been working with in schools–I wanted to give them a chance to heard by a different audience.

You can expect to laugh, cry, think and feel hopeful!

I want them to keep fighting the good fight of life and find their shine!

Shine will play from Thursday 16th until Saturday 18th May 2019 at the Traverse Theatre, Edinburgh. To find out more about the production, visit here…