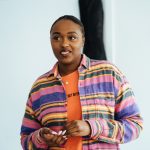 Home to Europe’s most famous street party, the Notting Hill Carnival typically witnesses over 1,000,000 spectators partying the day away on the streets of West London. With over 50,000 performers providing the iconic carnival’s sparkle, the August Bank Holiday weekend serves as a time to connect with fellow spectators and celebrate years of tradition the carnival has brought the capital. Inspired by her experiences of carnival, playwright Yasmin Joseph has crafted her first full length play J’Ouvert, which translates as ‘dawn’ in the Antillean Creole French language and is an annual street party taking place in many Caribbean Islands. Ahead of J’Ouvert’s run at Theatre503, Yasmin spoke to us about the show’s pivotal themes, how she approached creating the show and what she’d like for audiences to take away from it.

Excited! It’s great to finally be able to share this story with an audience. Part of what makes Carnival live and theatrical is the energy the dynamic audiences and participants bring to the streets – it feels like the audience is the final character of the production, and this will truly bring Carnival to the stage. I’m also looking forward to seeing the efforts of my creative team realised on stage. You never truly understand the roles within a creative team until you get to work with the people extensively and fully grasp how much people go above and beyond. Our Stage Manager, Lorrell Rawlins, is a perfect example of this, she’s been our rock!

J’Ouvert is a ‘hilarious and fearless story of two best friends, battling to preserve tradition in a society where women’s bodies are frequently under threat’. What inspired you to create a show exploring this?

My attachment to Notting Hill carnival stems from its power as a vital act of resistance. I see Carnival as a way for Caribbean people to push back against a country that seeks to erase their values, contributions and hard work. My choice to tell the story through the lens of two young Black women is driven by the fact that carnival is a tradition upheld by women and I am interested in interrogating how we are treated in the spaces that we pioneer.

The core development of the script took place during my time as a Resident Writer on Theatre503’s 503 Five scheme. The dramaturgical support from 503 was invaluable in driving my vision to the point of a full-length play. I had worked with director Rebekah Murrell on my short play Do You Pray? and knew she would be the perfect collaborator for this as a Bajan and an avid Carnival goer. It came to a point where the play needed to be embodied by actors to really investigate how we’d bring the life and joy of Carnival to the script, so we did two rounds of R&D to get the script to where I wanted it to be. When the wider creative team joined, they brought their own creative and cultural insights to the work, so it was important that the team surrounding the work were culturally rooted in the world of the play.

What has the rehearsal process involved?

Movement has been a key component of bringing Carnival to the stage, and we were super lucky to have someone like Shelley Maxwell leading the movement direction. There are many intricacies to how bodies move in Carnival spaces; the tightness of moving crowds, the heat of August, dances that are rooted in Carnival history such as chipping, creating an illusion of following a Mas Band. These were all equally important to the rehearsal process, and the actors researched bits of Carnival legacy to be able to draw on these physically and emotionally and get to the root of each character’s journeys and impulses. The process also gave space for Rebekah to experiment and play and continue to discover the joy of Carnival within the script.

Have you learned anything new from creating J’Ouvert?

The liveness of theatre is such an organic process which can make way for beautiful discoveries in the moment, but also present creative challenges. I’ve learnt a lot about people; honouring the creative processes of different people and what it means to work collaboratively in the truest sense of the word.

At a time where the cultural value of Carnival is being erased in the political landscape of Britain, I want audiences to think of all the ways we can continue to protect and preserve such a vital part of British history. I want the audience to question what it means to feel free in a country that has historically sought to suppress Black-led spaces. In saying that, I also want audiences to have fun! Part of the joy of Carnival is the community that comes with it, and it’s an integral part to the audience experience.

J’Ouvert is currently showing until Saturday 22nd June 2019 at Theatre503. To find out more about the production, visit here…