In 1879, Henrik Ibsen’s A Doll’s House might have played to sold out audiences at its premier in Copenhagen’s Royal Theatre but was Denmark really ready for Nora Helmer to ditch it all and ‘live her truth’? Of course, 19th century Danes weren’t as woke as we are now and probably hadn’t heard of ‘living your best life’. 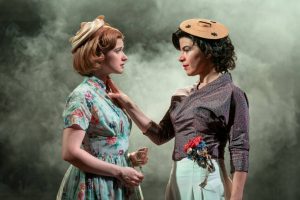 ‘Ibsen’ and ‘queer’ aren’t necessary two words you’d ever expect to find together, but Samuel Adamson’s Wife attempts to explore the queerness of Nora’s life in this fun production directed by Kiln’s artistic director Indhu Rubasingham.

Ibsen’s dramatic ending (Nora closes the door on her husband and three children leaving her plush, luxury lifestyle behind) has been interpreted in countless ways since it was first staged. Theatre dons have produced endless sequels, rehashes and essays attempting to explain why she does what she does, and what perhaps happened after- did she make it as far as Selfridges and turn back realising what she’d be missing without her hubby, as is briefly suggested in Wife? Or does she start a revolt against capitalism like in Ernst Brunn’s Where Did Nora Go When She Went Out?

Obviously, we’ll never really know where Nora went, mainly because she’s a made up character and didn’t actually go anywhere. But the fantastical nature of Nora is that she’s is fictional, yet so brilliantly defiant- she’s perfect camp fodder!

I could write at length about what makes a gay icon, but I’ll spare you the thesis. What Adamson wants you to believe in Wife is that Nora is the original gay icon, long before Judy Garland was singing Over the Rainbow! It’s playful, even if his philosophy is a little thin on the ground.

Wife starts where Ibsen left off, slamming the door of the Helmer household, but Adamson has us watching a fictitious staging of the play in 1959, 8 years prior to the decriminalisation of homosexuality in the UK.

Actress Suzannah (Sirine Saba) is backstage when fan Daisy (Karen Fishwick) enters her dressing room with husband Robert (Joshua James). The scene unfolds, unsurprisingly revealing that Daisy and Suzannah are actually having an affair shroud in secrecy- after all, if they were men they’d get five years in prison. Daisy longs to be like Nora and leave the sorry state of a marriage she’s in, but it’s the 50s and she knows what the consequences of that would be.

Adamson’s play spans decades of queer identities wanting to break free, wanting to shut the door on their reality. Whether that’s Ivar (Joshua James) in 1988 desperate for 20 year old boyfriend Eric (Calam Lynch) to introduce him to his parents, but knows he can’t because Eric’s below the age of consent. Or Ivar 30 years later longing to leave his exasperating relationship with fatuous husband Cas (Lynch).

Wife’s final time travel destination is 2024, where queer identifying Clare (Fishwick) is lurking backstage in awe of Suzannah, a scene which almost runs parallel to the opening. This is all part of Wife’s reliance on merging time and space. The pulling of the past is a reminder of the complex nature queer identity has– a hotchpotch of cultural crossovers and “bending” of history.

There’s camp aplenty in Adamson’s writing, ‘plow me in the name of Ibsen’ young Ivar shrieks- playing right into the hands of the theatrically erudite audience. But there is softness too, ‘Will this Nora change me?’ asks Daisy, complimented faultlessly with the halcyon warmth of Guy Hoare’s lighting design.

Saba is delightful playing a series of plucky, courageously queer characters. She delivers her quips and putdowns with a delicious cattiness. Karen Fishwick’s is also a charm, portraying an arsenal of characters with ease.

Act two trails off, mainly because it’s too wrapped up in connecting multiple histories- like a bizarre episode of Who Do You Think You Are where everyone turns out to be gay.

There are a few iffy moments with the direction too, the dressing room scenes feel badly blocked, however Wife’s humour and poignancy is what holds the play together. Luckily it goes beyond just a discussion of gay lineage. It’s a charting of the battles and subsequent pitfalls each queer generation has fought through. There is great hope in Adamson’s work, a golden utopia seen through the prism of Nora Helmer, a woman who dared to risk it all so she could slam the door on the past and be her true self.  4/5

Wife is currently showing until Saturday 6th July 2019 at the Kiln Theatre. To find out more about the production, visit here…