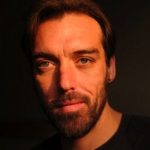 Commencing on Monday 17th June, Refugee Week UK will witness various arts events take place in various locations. Acknowledging the stories of refugees and asylum seekers, this crucial week offers a voice to the often marginalised, allowing for conversations to take place to promote collaboration and a sense of community. One of this year’s projects is Cohere – an immersive installation originating from award winning poet, Zaffar Kunial’s writings. Using his words as a starting point, four visual artists, Geoff Brokate being one of them would go on to craft creations as a response, resulting in Cohere. Ahead of the installation’s first showing, Geoff talks to us about the event’s creative process, responses from creatives towards the initial workshops and what audiences can expect!

Cohere, an immersive exhibition inspired by Zaffar Kunial’s poetry will go on tour, starting off at Home Manchester, before visiting the V & A in South Kensington, Hull International Photography Festival and concluding at Shoreham Wordfest. How are you feeling ahead  of the tour?

I created Cohere as result of my friendship with Zaffar Kunial. I had known him for a year without knowing he was a poet. After reading his first publication, Us, I was blown away by the quality of his work. I decided to arrange a situation where Zaffer could run work shops with refugees. I saw through Zaffer’s books the power of telling one’s own story through a poetic voice. It enables an agency and an ownership of your situation rather than someone else telling your story which often happens to refugees or migrants.

As a visual artist myself, I thought it would be a challenge to create work that was inspired by and responded to the work that Zaffer and the other writers produced. The result has been an exciting mixture of performance, film, photography and installation. We feel like a troupe of artists about to go and share our ideas so we are very excited on the eve of the tour.

Works have been inspired by a workshop led by yourself. The result being new works created by both writers and visual artists. Can you explain what happened during the workshop?

The workshop began with the participants sharing their previous work and speaking openly about what it is to be a refugee. The conversations were frank and honest illustrating the complexities and the dualities of leaving a home that was not of benefit and the unsettling nature of arriving in a country that is foreign and at times unfriendly. Through Zaffer’s guidance 4 refugee writers developed dramatic and intensely personal stories about their journey.

All creatives taking part in the workshops and final projects are from the refugee and migrant community, the theme of cultural dislocation being the main driving force of the workshops. How did all creatives respond to this? How did they find exploring this topic?

The subject came naturally as it was each participant’s personal experience. The process has been extremely natural and everyone has been given space to evolve and generate their own voice. If you look at Kani Kamil, an Iraqi refugee who has created a handmade dictionary made from her own hair, she is outlining the innate gender inequity within the Kurdish language. by sowing with her own hair.

Have you learned anything new from taking part in this project?

My discovery was that the land where we were born is filled with meaning and if we are uprooted to a foreign country that land ceases being of importance any more and it simply becomes ground. A significant part in becoming established in a new country is rebuilding those rituals of meaning that connect you to a place. The things we take for granted like knowing plant names or weather patterns. Also the subtle nuances with in a culture make a new language more complicated. Its not simply learning the English language, you have to learn what it is to be English. Not an easy question to answer.

What can audiences expect from the immersive installation?

I think the work is fearless. It is bold and isn’t afraid to outline the complications and frustrations that arise from being a refugee or migrant. The writers are all unique so there is a mixture of classical poetry and contemporary performance art. The visual work covers the wide spectrum with photography, experimental films and installations.

I think audiences will be confronted with the issues raised through the performances and installations but I would like them to walk away with an empathy generated from a deeper understanding of what it is to be a refugee or migrant.

Cohere will be on tour, to find out more, visit one of the links below: