Writer and Performer Koko Brown talks about her latest show ‘GREY’, the Second show in her Colour Trilogy 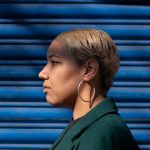 Hi Koko, you’ll be debuting GREY from 27th June at the Ovalhouse Theatre. How are you feeling ahead of the run?

I am feeling all of the feelings! This is one of the biggest projects I’ve done to date (if you include all the events and workshops that are attached to it) so there’s a lot of pressure to get it right. Luckily I’m surrounded by such an experienced, creative and supportive team that I can’t help but feel confident that we’ll pull it off.

GREY is an autobiographical show exploring depression and ‘challenges the taboos which so often obscure black women’s mental health.’ What inspired you explore this particular topic?

I live with depression and was tired of seeing work being made about it that portrayed it as some beautiful but dark existence. That’s not the life I live. So I felt like I had to make something that was true to me. Add in the fact that Black women’s mental health is so rarely spoken about – and when it is it’s portrayed in a boring, two-dimensional way – meant that I had to write this show. If not for me, then for the women like me.

GREY is the second show in your Colour Trilogy. How did you find the response to your first show WHITE? Has this informed how you’ve approached creating GREY?

The response to WHITE was surprising for me. I thought that maybe a few people would be able to relate to my specific experiences but didn’t think much more than that. When I realised that people were relating to how I told my truth and the way I shared my story, I knew I was doing something right. So while creating GREY I kept reminding myself of the things that I had done right and expanded on them. As with WHITE, GREY is multidisciplinary, personal and honest – possibly to a fault but, I guess, that’s the way I make theatre.

The show stars yourself and Sapphire Joy and is directed by Nicholai La Barrie. How have you found the rehearsal process?

The rehearsal process has been one of the most fulfilling times of my creative career. Being able to play alongside Sapphire Joy, who’s skill as an actor is something that excites and surprises me everyday, in a room led by Nicholai La Barrie, a creative force who knows how to push, support and care simultaneously, is something that I could have never dreamed of.

After working with Nicolai on WHITE, we had created a language and way of working that meant we had a shorthand when starting on GREY. We didn’t have to start from scratch or doing any of that back and forth, so bringing in Sapphire (who had worked on the R&D of the show) was seamless. Both of them make it a room that I want to be in and give my all to.

GREY incorporates spoken word, vocal looping, movement and has British Sign Language integrated. How have you worked with the creative team to realise the show?

Everyday I can’t believe how lucky I am to have such a talented creative team working alongside me on this show. They allow their creativity to run free, they are open when they don’t agree with things and they question everything – never allowing me to settle for the easiest answer.

When we began working on GREY we spoke about the languages of the show and what the rules were. This meant that we had a framework when building the show so that, although we have eight different creative brains in the room, all aspects of the show spoke to each other. We also have regular show-and-tell sessions so that we know what everyone’s been up to – this means that each artist isn’t just working in a room on their own, instead they have the ability to get feedback… even if, 9 times out of 10, that feedback is just ‘wow, that is astonishing, you amaze me!’

GREY is a show about living, not suffering, with depression. It is honest and exposing but fun and colourful. Whatever you expect from a show about depression, this probably isn’t it.

I want audiences to understand that, for me, this is what it looks like and this is what it feels like. Maybe it looks or feels the same to them and, maybe by sharing this, it makes them feel a little less alone.

What advice would you give to aspiring writers and performers?

Just do it. Write the play you want to watch. Make things that excites you. Make art that you enjoy – if other people enjoy them too, that’s a bonus.

GREY will be showing from Thursday 27th June until Saturday 13th July 2019 at the Ovalhouse Theatre. To find out more about the production, visit here…