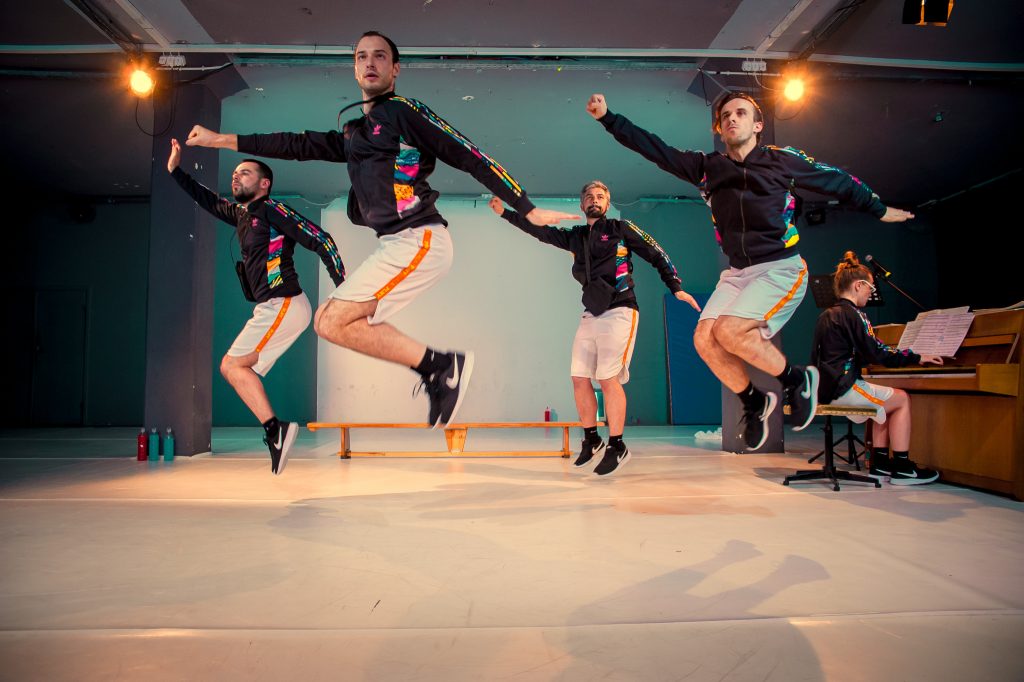 The other three productions were not entirely apolitical, although this might not have been obvious at first glance.

Cezary Goes to War was produced by Komuna // Warszawa, the most important independent avant-garde theatre in Poland. This one-hour production was considered the theatre event of the last season. Cezary Tomaszewski‘s partly autobiographical show is danced and sung by four actors, all representing Cezary, to music by Handel, Debussy, Shostakovich and Stanisław Moniuszko, the father of Polish opera. Accompanied by a female pianist, the male actors strive to prove their fitness and manhood whilst singing songs about a dying Cossack and a brave knight to whom war is “a delight, my one delight”. Tomaszewski is using the criteria of military scrutiny to shine a light on life in today’s capitalist society, our perception of masculinity and our relationship to the state. Classified as category E, Tomaszewski was deemed unfit for military service, which was fine by him until he observed a group of soldiers taking a shower. Suddenly he longed to be in category A to be part of this wonderful band of brothers. A hilarious and rather upbeat evening with lots of cart-wheels, push-ups and shirts coming off during the most heroic refrains. This is certainly a daring production considering the current political climate in Poland. 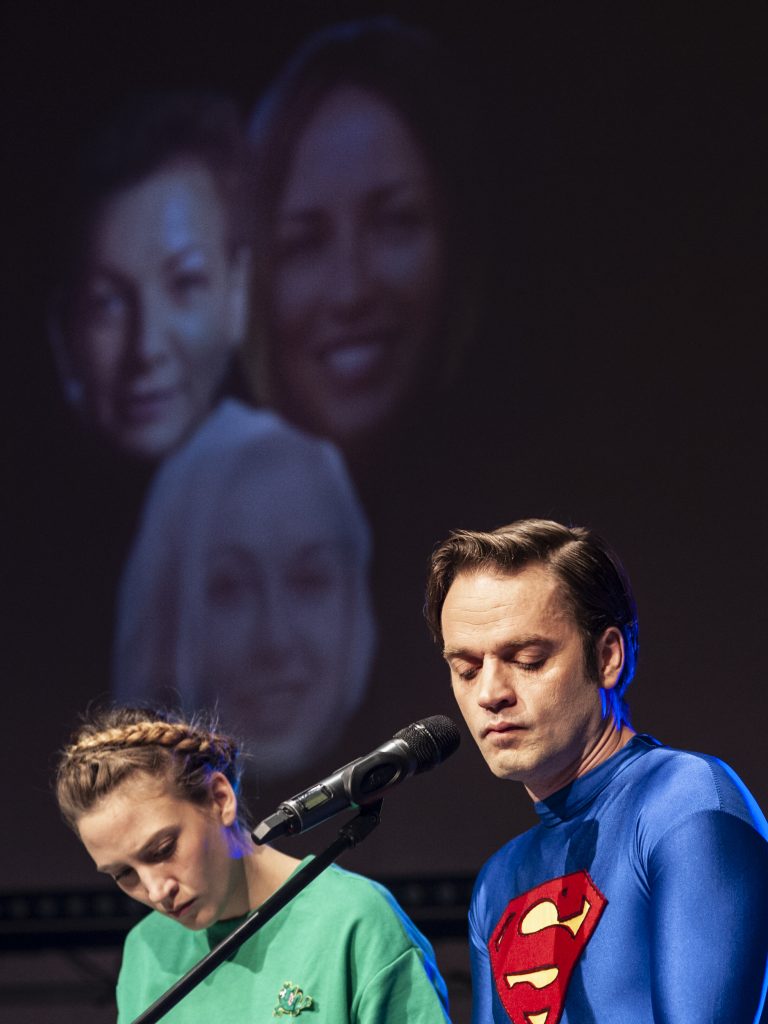 Together with director Wojtek ZIemilski, amateur futurologists Jaśmina and Piotr Polak were trying to explain the future by scrutinising the past in the entertaining one-hour production The Polaks Explain the Future. Jaśmina was dressed up as a frog, Piotr as Superman and the two siblings were both operating a multifunctional keyboard. The keyboard worked like a DJ set, which allowed them to navigate a variety of Polish heads and words, some of them rather famous: Polish politicians, the former Pope, Robert Lewandowski, and last but not least, Mother Polak. The images were projected fast and furious, until there was a cacophony of words. The Polak’s mother had a rather pessimistic view of the future. She was convinced that people would stop liking each other and that the world would drown in garbage: “I don’t see any hope because people are so stupid. Life on earth is suffering”. Even the visionary ideas of the two Polaks regarding the good life in the future – mandatory techno, robots everywhere, and an extra colon – cannot sway their mother’s pessimism. Eventually Mother Polak is sent to outer space to celebrate a wild techno party. When she returns, everything is fine: ” I am not afraid. I don’t see anything that will be bad. People will like each other more.” Rather a satire on dystopias. 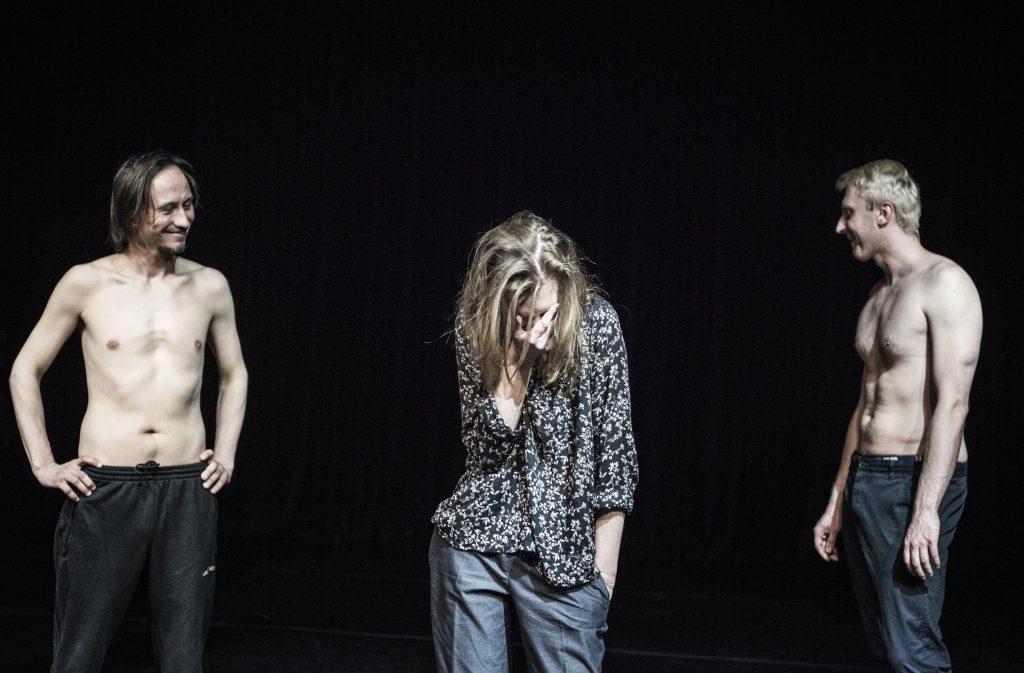 The third play, Anna Karasińska‘s Fantasia was really a fantasy about theatre. First performed at the TR Warszawa , the production explored the ability of six actors to be everything without even playing those roles to create theatre. Karasińska originally studied philosophy and film direction and is one of the most original voices on the Polish theatre scene. In her work she challenged the actors and the audience in equal measure, relying almost entirely on the imagination of both. Six actors, three men and three women, and one narrator occupied a bare stage. The narrator started off by saying: “Dobromir is playing a white bear” and talked about this non existent bear costume in detail. The narrator described the roles and the actors made subtle changes. The text could be lyrical and also quite funny: “Dobromir plays someone who pees in a pool” whilst “Monika is playing a politician who didn’t pay attention to half of the country.” Birth and death, embarrassment and joy, loneliness and happiness we re-explored in this intriguing production where the audience came to meet many fascinating characters including Sinbad and a talking corpse who complained about garden work near his grave and buried pets. 4/5