Them! @ The National Theatre Scotland Review

In an ambitious new performance event from Stuart Laing and Pamela Carter, Them! explores questions of identity amidst the daunting landscape of the twenty-first century. The play comprises three stages beginning with a chat show like performance hosted by the spunky and energetic Kiruna Stammell. 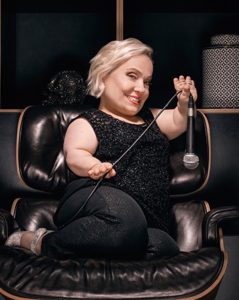 Within the show Stammell interviews several components to a remake of the 1958 horror film Them!, which depicts the earth being taken over by killer ants. This is followed by two more phases, the first encouraging you to let loose, and the second asking you to muse on what has been witnessed. Them! is a is an allegory for what we fear in modern society, seeping with dark humour and thoughtful social commentary.

Kiruna Stammell’s stunning performance steals the show. Her skill guides you through an understanding of the play’s complex themes, her apex being a monologue, declaring that she sees every single one of us despite the nebulous nature of being in a darkened audience. Her delivery of these moments is invigorating, rousing the audience to believe in a better world. This works especially in counterpoint to representation of Laing, played by Ross Mann, who embodies an intense, broody pessimism. This is an interesting directorial choice, when Laing has chosen to represent himself as a pessimist in a piece that simultaneously oozes positivity and activism. Them! is deeply self-referential and meta, keeping you on your toes from start to finish.

The performance loses traction as it enters its second phase, as the introduction of new characters goes even further left field (if you could believe that is possible). There are several moments when the piece feels like it is about to end, but doesn’t. The penny drops and then more questions are raised, reducing the impact of a play that feels like it ends about four times. For a play with so many ideas to offer, some clarification could increase its effectiveness.

Nonetheless, the absurdity of Them! will undoubtedly mean it remains in the minds of audiences. Even if this is with an air of confusion, rather than ideological clarity.

Them! is currently showing until Saturday 6th July 2019 at the National Theatre Scotland. To find out more about the production, visit here…