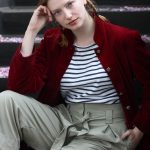 We’re beginning to live in a time whereby the rights and experiences of women are truly being put into the foreground, and this is significant. We’ve witnessed recently, how laws passed can negatively impact on communities; the Alabama case recently in which they passed a bill banning abortion serving as a stark reminder as to how far we societally have to go in order for  women’s voices to be heard and rights prioritise. Drawing from her own personal experiences, writer and performer Claire Rammelkamp talks about her first full length show, A Womb of One’s Own. Showing at this year’s Edinburgh Festival Fringe from late July at the Pleasance Dome, we hear more about Claire’s creative process and being supported by the Charlie Harthill Theatre Reserve Fund.

Hi Claire, your show A Womb of One’s Own will show from the 31st July until 26th August at this year’s Edinburgh Festival Fringe (Pleasance Dome). How are you feeling ahead of the run?

I’m so excited to show our work to an international audience, and especially to perform it at The Pleasance. I’m also excited to share it with lots of the amazing creatives who will be up there. The Fringe is a magical atmosphere. Where else can you see three shows in the morning, perform your own show, bump into your favourite comedian, eat a deep fried mars bar, and see a midnight improvised musical all in one day?

The show is incredibly topical, exploring ‘a young woman on her journey of self-and sexual discovery, exploring the emotional rollercoaster of an unwanted pregnancy, an abortion, and the surrounding taboos.’ What inspired you to explore this?

I had an abortion while I was at uni and found it pretty emotionally overwhelming. Fortunately I have a lot of friends who are Funny Women, as well as a mum who is also something of a Funny Woman, and they would cheer me up by making, frankly, quite inappropriate jokes. It made me realise how talking about difficult situations, laughing about them, makes them so much easier to handle. It’s tough being a young woman, it’s tough going through an abortion. I think audiences enjoy seeing their experiences played out on stage and getting to cackle at them. We’re also getting to a stage where feminism is more and more welcome in comedy.

A Womb of One’s Own draws on your own personal experiences, how have you found the process of creating the show?

It’s been pretty cathartic. Reframing some moments into theatre can make them seem beautiful or funny or tragic when at the time they just seemed crap. It also feels very much like a shared experience, because we all play the same character on stage. There are some major differences from my own experience though; Babygirl, the character in the play, doesn’t have a support network. We wanted to explore that, because so many women don’t have anyone they can talk to, and until very recently with the #youknowme movement, didn’t really have any public figures to look to for guidance. One wonderful effect of the show has been the number of women who approach us afterwards to talk about their abortions like its a huge weight off their chest.

Have you learned anything new from making the show?

Well, for a start, I’ve learned how to make a show. This was our first full-length show as a theatre company and we had to do everything from scratch. Starting a theatre company is quite a messy learning process which takes a lot of trial and error, because there isn’t really a degree or an apprenticeship you can take. You learn on the job, share skills, beg favours, scrounge rehearsal space, send thousands of emails, and try to fit it all around making rent. I’ve learned how to be a producer, and a runner, and a marketing manager, and a fund raiser, and a (bad) technician. I’ve also been consistently amazed by how talented the women I work with are.

The show is supported by The Pleasance Charlie Hartill Theatre Reserve 2019; a fund supporting theatre makers. How has this fund supported you and how did it feel to find out you were a recipient of the funding?

It was an absolute dream come true. The Pleasance is a legendary Fringe venue, and there was really no way we could have gone to Edinburgh without the Charlie Hartill Fund. We simply couldn’t afford it. Unfortunately, like a lot of areas in the arts, the Edinburgh Fringe is a bit of a rich-kids game. The Charlie Hartill fund gave us monetary support which has enabled us to cover things like accommodation, and as well as this, we’ve received a lot of guidance and support from the Pleasance team. It’s such a great resource, there should be far more funds like it, otherwise there will be a whole lot of art that never makes it to the Fringe.

Relatable situations, fast wit, a dance routine (love a routine), four women playing the same central character as well as a whole bunch of others, a bit of nostalgia, a lot of drinking. Cock jokes. Vagina jokes. Queer romance. A big dollop of feminism. A touch of pathos. A hilarious, hard-hitting rollercoaster ride.

What advice would you give to aspiring writers/ performers?

If no one gives you a job, make your own work. Find a group of people you value artistically and collaborate. Don’t be heartbroken by rejection, even though it hurts like a bitch. Most importantly, making art is like breathing out. If you don’t breathe in, you’ll run out of air and pass out. Take time to breathe in; go for a walk, go to a gallery, read a book, go to the pub with your friends. Don’t sacrifice your mental health for your art, because your art won’t benefit from it and neither will you. This industry should be fun, otherwise we might as well all get stable jobs.

A Womb of One’s Own will be showing from Wednesday 31st July until Monday 26th August at the Pleasance Dome as part of this year’s Edinburgh Festival Fringe. To find out more about the production, visit here…