We can all agree that parenting can be tough at times, but imagine raising a son who looks so different that everyone thinks you’ve kidnapped him. BAFTA nominated writer Gabriel Bisset-Smith has based Whitewash on his own experiences as the white passing son of a mixed race woman, and the complexities of race in the gritty London of the 1990s, through to the property obsessed 2010s. 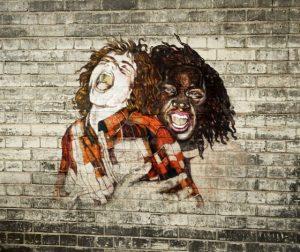 Mary is a single mother, who struggles to find her identity and sense of belonging in the UK. Her feelings of alienation are only exacerbated by her relationship with her son Lysander, who benefits from white privilege, but has his own struggles trying to connect to a part of himself and a community that he doesn’t feel truly part of.

Mary had to give up her dreams of attending art school to raise Lysander in a deprived housing estate in Kings Cross, and in the present day, up and coming property developer Lysander is fighting for a sensitive restoration of his former home in the face of total redevelopment. This battle goes beyond demolition and raises the question of whether he is erasing part of himself that he never truly came to terms with.

There is a clear difference in life chances and privilege between the two, but it is Mary who is the tenacious individual, who despite the odds strives to keep a home, raise a child and pursue a career as an artist in a white and upper class art world. Despite his success, Lysander seems to crumble under the weight of his job, fatherhood, and property ownership, using cocaine as a means to escape.

If this all sounds heavy then it’s important to stress that Whitewash is a very fun play. The pacing of the play matches London’s relentless urban spirit and discordancy, jumping between the 90s and 2010s as both character’s voices and stories interweave.

Gabriel tells a story that must have been cathartic for him, as he has likely faced similar issues to Lysander. Whitewash is both a love letter to his mother and the city that made them both, with its complicated layers of history and race. It also tackles uncomfortable questions, as the play ends with Lysander’s baby daughter, who is perceived as white, being admired by a young policeman, which is in complete contrast to the hostile intrigue Mary and baby Lysander receive from the policeman at the beginning. In 2019, where mixed race people are more common and are even part of the Royal Family, it is important to ask  who gets to decide a person’s race and identity, who is British, and the impact mixed race individuals have on society’s reaction to this. 4/5

Whitewash is currently showing until Saturday 27th July 2019 at the Soho Theatre. To find out more about the production, visit here…