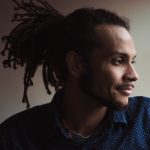 Sound is present all day, everyday, and is something we take for granted. Whether we’re engaging in  conversation and listening to the other person’s dialogue,  listening to our favourite playlists on our daily commutes, watching the latest Netflix boxset or blockbuster movie – sound is integral to our daily interactions. What musician, sound therapist, sound scientist and beatboxer Marv Radio has discovered throughout his journey as an artist is the healing power of the voice and sound. This is an ethos he utilises within his own work, and will be exploring in his latest show ‘Mantra’ showing at the RADA Studios from 16th to 18th August as part of this year’s Camden Fringe Festival. Marv tells us more about his show!

Hi Marv, your show Mantra will take place in this year’s Camden Fringe at the RADA Studio Theatre 16th to 18th August. How are you feeling ahead of the performance?

It’s a mixed bag of emotions, I’m hopeful, excited, nervous and wishing I could slow down time to get everything done. I know it will all be exactly as it’s meant to be on the night, but I don’t think I’ll be fully comfortable until the tech run is locked in.

The show is an autobiographical piece, exploring your ‘true story of falling and getting back up’. What inspired you explore this on stage?

Originally, I was going to develop an entirely improvised show that wasn’t going to be about my story, but decided that sharing my vulnerabilities in this way could be therapeutic for myself and my audience.

Your past experiences have led you on your journey of learning how sound and vibration affect the mind. In turn, influencing your approach towards self care and holistic therapies. Can you explain your journey towards this?

It was a completely unexpected path for me. I had an out of body experience when performing on stage at college. I was watching myself from above and could feel the energy in the room. I didn’t even know it was possible. Beatboxing led me down the path of breath control, which then inspired me to study various forms of breathwork. I then started tuning into the effects of different frequencies on my body and mind. Eventually I started looking at the shamanism of indigenous cultures around the world and visited the Amazon Rainforest, where shamanic initiation from master healers taught me to hack my voice and go deeper in to the study of what was possible, how it felt for me to make sounds and how it felt for clients to receive them. Ultimately, I feel that our voices are the greatest tools for transformation, growth and recalibrating our internal and external worlds.

You’re a musician, sound scientist, sound therapist and beat boxer, having performed at Glastonbury and the O2. How have you found experiences like these?

Performing for any audience is euphoric for me and the stage is where I feel most at home. The more people in the audience, the higher the energy, but even performing for intimate crowds can be the most beautiful experience. My stage presence has improved my confidence in waking life and the memories of my greatest achievements are always with me. I’m excited about taking things to a new level and reaching bigger audiences in the next 12 months.

How have you approached creating ‘Mantra’?

Mantra has been a great experiment in trial and error. I started by booking a free fringe venue, had no time to rehearse and improvised the whole show for my Edinburgh run, performing some of my songs in between. I remembered which moments were best received and which ones flopped and adjusted over the run. Since then I have worked with Talawa Theatre Company, who helped me develop the piece through their Studio Firsts and Talawa Firsts programs. The last shows I did were partially improvised, with a self-produced soundtrack to help me keep time as I told the stories differently in each show. I am now working within an Arts Council funded research and development process and for the first time I have actually written a script. I am working with movement directors and dramaturgs as well as collaborating with visual and sound artists to create the visuals, soundtrack and merchandise for the show. It’s the type of show that will continue developing with time and may even have scope for sequels.

Your work as a sound therapist witnessed yourself facilitating a project with laryngectomy patients in partnership with the charity Shout At Cancer. How did you find being a part of this incredible experience?

Working with the laryngectomy patients was a beautiful experience. To see the pride in the eyes of participants after surpassing their own expectations and those of others was priceless. To hear crisp, clean beats being made by the patients and then be told of how the patients had found the exercises to be helpful in increasing airflow and expression is a real proud moment that will always be with me.

To be honest, I think even my close friends will be surprised as to where the show has gone in a short amount of time. The show is a multi-dimensional, humanist reflection on my many rises and falls, a true story set within a sci-fi container. Mixing fiction with non-fiction has allowed the show to be more mysterious, while still being relatable and allowing audiences to reflect on what makes them who they are, accepting their light and their shadow, mistakes and triumphs as vital parts of the fullness of their being. Oh and of course, I have managed to fit some sound therapy in there too!

‘Mantra’ was previewed at the Camden People’s Theatr last year. What were responses towards the show?

The show at Camden People’s Theatre was a monumental success, not only because I sold out the room as sole promoter, but also because the show was delivered so well to an audience of my friends, family and perfect strangers. This was my first standing ovation, followed by 2 more in recent shows at Shoreditch Town Hall and Oxford Playhouse. The feedback was overwhelmingly positive and the show was received with tears, laughter and love.

Mantra will show from Friday 16th to Sunday 18th August at RADA Studios as part of this year’s Camden Fringe Festival. To find out more about the production, visit here…