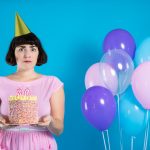 From the updating of a status, to the purchasing of products to the sending of an email, these actions are all made possible by numerous algorithms programmed to make our online experiences as seamless as possible. Algorithms silently navigate the day, manipulating the feeds we see on social media platforms to lining up prospective matches on dating apps. Daily life now tends to include the online world, a phenomenon we’ve witnessed grow at speed within the past decade and shows no signs of stopping. Exploring our online era further, playwright Sadie Clark presents ‘Algorithms’ showing at the Pleasance Courtyard at this year’s Edinburgh Festival Fringe. Ahead of the month long run, Sadie talks more about the show.

Hi Sadie, your play Algorithms will take part in this year’s Edinburgh Festival Fringe throughout August. How are you feeling ahead of the run?

I am having all the feels… I’m nervous and excited and feeling a little bit emotional to be honest. When I went up to the Fringe in 2017 as a punter I dreamt about performing my own one-woman show at the Fringe one day, and now here I am. There’s a lot of pressure that comes with Edinburgh though: worrying about ticket sales and reviews and how the show is going to be received and what might happen with it next. But I’m trying to hold on to the fact that I absolutely LOVE performing this show, and that if the show makes just one audience member feel a little less alone inside their own head then I’ve done what I set out to do.

The show explores love, happiness and satisfaction in a world defined by online interactions. What inspired you explore this topic?

There was a time towards the end of 2017 when I wanted to smash my phone into smithereens or lob it off a bridge. There were all these people I was connected to online, whose lives I was watching unfold on Facebook and Instagram, but I felt utterly alone, lost and isolated. Everyone else seemed to be having such a great time and I couldn’t get off the sofa. I couldn’t work out why everyone else seemed so satisfied whilst I was scrolling down and down my newsfeed feeling more and more depressed and inadequate. Once I got some help for my mental health I started thinking about this online world we live in now: everyone sharing ‘select’ bits of their lives on social media, and commenting on posts by way of conversation, dating apps you can download in seconds with thousands of people to talk to at your fingertips, and yet you can still feel so lonely.

How have you approached creating Algorithms?

I began writing it on Soho Theatre’s Writers’ Lab at the start of 2018. The first few drafts of the play were almost like word vomit, erupting on to the page. My dramaturg on the course, Jules Haworth, gave me some really helpful feedback on structuring those first few drafts, and I also read John Yorke’s ‘Into the Woods’, which had some really useful insights into creating a narrative arc. Once I knew my protagonist, Brooke, was going to work as an algorithm writer at an online dating site I began reading as much as I could about algorithms and online dating to flesh out the world of the show. When my director Madelaine Moore came on board in September 2018 she also had some really helpful notes that I took into the next few drafts – she was instrumental in making the Mother character such a big part of the show actually. Then we got it up on its feet for a couple of work in progress performances towards the end of last year – two were at Soho Theatre in fact – to hear what audiences thought of it. The final stage of development was part of an Arts Council funded R&D where I spoke to women who work in tech to gain a more authentic insight into working in that environment. Once those last redrafts were done we cracked on with rehearsing and previewing the show ahead of Edinburgh.

Algorithms will see Madelaine Moore direct, as you perform your work. How have you both worked together to realise the show?

As I said, Maddy was instrumental in some of the later redrafts of the show. I think the Mother character is certainly many people’s favourite secondary part, and the relationship between Brooke and her Mum Lucinda is definitely one many people will relate to! Once we were in the rehearsal room I mostly left the vision for the show up to Maddy (although the vision for the set was a combined effort). She has a brilliant eye for directing and came up with so many wonderful visuals for the piece. She’s also been great at bringing out the light and shade of the writing, making sure I drive through the story so that the sadder moments that need space around them have earned it. There’s quite a bit of dancing in the show too and I think that’s down to a combination of Maddy and I having a similarly silly sense of humour, and the fact that I’ll take any excuse for a boogie. We also worked together to talk through the sort of lighting and sound we wanted and then Jennifer Rose (lighting designer) and Nicola Chang (sound designer) came on board. They’ve done wonders to add atmosphere to the piece!

Have you learned anything new from the creation of Algorithms?

Hmmm… maybe that if you take a leap of faith creating something that’s authentic to you, it could end up speaking to more people than you ever expected.

You’ll probably relate to it if you’ve ever wasted hours on social media wondering what you were doing with your life, ever gone through the hell of feeling painfully lonely whilst online dating left, right and centre, or ever wished your mum would stop asking you why you were using WhatsApp so late on a work night…

Expect lots of proper laugh-out-loud moments, maybe the odd tear or two, some seriously funky dancing, and finally the joy and awe that will no doubt ensue when you see our SECRET WEAPON in the jubilantly triumphant ending! But information about this item is embargoed…you’ll just have to come and see the show…

That there is no magic algorithm that equals happiness… it comes and it goes and it’s okay not to feel happy all the time. Sometimes you just have to live in the moment, and maybe that means putting your phone off for a bit…

Create a goal, and then make a plan with deadlines to reach that goal.

Also don’t be afraid to try things and don’t be afraid to share your work. As a life-long perfectionist who worries an excruciating amount about getting things wrong and doesn’t want to share anything until it’s completely ‘right’, my best piece of advice is to stop striving for perfection. Keep working at the piece, keep making it better and keep responding to what your audiences are enjoying, but know that nothing will ever be perfect… except maybe a freshly made bed…

Algorithms will show from Wednesday 31st July until Monday 26th August 2019 at the Pleasance Courtyard as part of this year’s Edinburgh Festival Fringe Festival. To find out more about the production, visit here…

« Previous post
Beatboxer and Sound Therapist Marv Radio talks about his show ‘Mantra’ playing as part of Camden Fringe Festival 2019!
Next post »
The Girl on the Train @ The Duke of York’s Theatre Review