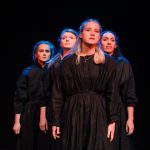 What do you immediately think of, when you think of the term ‘witch’? Archaic? Witch hunts? Trials? Potions? The list is endless, however evokes a certain feeling of fear and destruction. Defined as ‘A woman thought to have magic powers, especially evil ones, popularly depicted as wearing a black cloak and pointed hat and flying on a broomstick’ (Oxford Dictionary) this very labelling of women throughout history within societies has accumulated an atmosphere of fearing those who perhaps do not conform to the gender roles established by patriarchal communities, and has witnessed the creation of damaging divides. Addressing this troublesome societal issue throughout the ages, theatre company Incognito present The Burning – an exploration of gender non conformity within the patriarchal construct. Ahead of their performances at the Pleasance Courtyard, Edinburgh, Director Roberta Zuric tells us more about the show.

Hi Roberta, Incognito’s The Burning will take part in this year’s Edinburgh Festival Fringe throughout August. How are you feeling ahead of the run?

Really excited. It’s my 8th Edinburgh Fringe, 4th with Incognito… and I feel like I’m finally getting the hang of it! It’s always nerve-racking leading up to the previews but the audiences are so great up here at the Festival that the nerves disappear quite quickly.

The show explores the ‘derogatory depictions of women who do not conform, who live on the fringes of society and who challenge established patriarchal structures’. What inspired you explore this?

I read Silvia Federici‘s Caliban and the Witch which looked at how the early transition into capitalism fostered a spike in witch-hunting in Europe. It got me interested in where the word ‘witch’ came from and how its meaning has evolved and impacted our understanding of gender dynamics today. We have such preconceptions when talking about the idea and history of witches – I wanted the show to challenge these.

How have Incognito approached creating the show?

We work quite physically and spend the first part of rehearsals finding the movement language of the piece. There’s a lot of research that has gone into the show and we had some time earlier in the year to workshop some of the stories and themes we were interested in. This year, I have also brought onboard a brilliant dramaturg – Zoë Guzy-Sprague – who has helped us shape the play and provided most of the beautiful language. I’m also very fortunate to have an exceptional cast of actor-devisers who have helped create and shape much of the material.

The Burning will use live music and true historical accounts to explore its themes. What has inspired the company to explore the themes featured in this way?

The play spans several centuries of British history which in itself is already quite epic. To effectively portray this scope in time and themes, we have the brilliant Phoebe Parker creating original music whose vocals encapsulate the breadth and depth of the stories we’re telling. Her sound is stunning and adds a really important layer to the show.

A lot. One of my favourite parts about creating theatre is the research that has to be conducted to really understand why the characters behave the way they do. To understand what the world was like and how it has evolved. One of the facts that stuck with me throughout this process is that most people in medieval England truly believed in the supernatural. It’s quite hard to fully comprehend this idea today in our rather cynical world.

The Burning was recently performed at The Greenwich Theatre, as part of their Edinburgh Preview programme. What were responses towards the show?

Really great and positive. We were lucky to have such a forthcoming audience who gave brilliant feedback which has helped us shape the show for the Edinburgh Fringe.

A more in-depth understanding of how capitalism has affected gender dynamics and our relationship to our bodies. But we also aim for the show to provide hope and the beginning of a conversation about how things can change for the better.

What advice would you give to aspiring directors and theatre makers?

Create. As much as you can. And find the people you love working with, that push you creatively. It will make you a better artist.

The Burning is currently showing until Monday 26th August 2019 at The Pleasance Courtyard as part of this year’s Edinburgh Festival Fringe. To find out more about the production, visit here…