Playwrights Chantelle Alle and Melissa Saint talk about their play ‘PYNEAPPLE’, showing at the ‘This is Black Festival’! 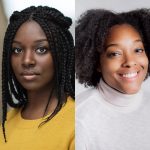 Addressing the lack of culturally diverse stories depicted on stage, Steven Kavuma’s ‘This is Black’ Festival gives voice to four new pieces of writing, offering a platform to varied perspectives of the black experience within the UK. Taking part in the inaugural new writing event, playwrights Chantelle Alle and Melissa Saint present ‘PYNEAPPLE’, a show exploring the stereotypes that young black women face within society. Ahead of the show, both Chantelle and Melissa tell us why they’ve explored this important topic, they’re creative process and what they’d like for audiences to take away from the show!

Hi Chantelle and Melissa, your show PYNEAPPLE is taking part in the debut ‘This is Black’ Festival at the Bunker Theatre. How are you feeling?

We’ve been feeling a combination of things, from excitement to nervousness. It’s a massive achievement so we are feeling very proud, but also know that we need to keep a sense of focus as there is still work to be done! Mostly, we’re feeling very privileged to have our work feature in the festival; what a fantastic moment to be a part of.

The show explores the stereotypes surrounding young black women. What inspired you explore this topic?

Well, the obvious answer is that we are young black women! Though, the inspiration really stems from the frustration that we and other black women feel about representation, images and single stories of ourselves. Black women are too often reduced to stereotypes or labelledand it’s extremely damaging. There aren’t enough honest depictions of black women in the arts and it’s mandatory for us to understand and dismantle those stereotypes in order to progress. So many black females are on the receiving end of these negative stereotypes of black women, and being in the creative industry means we are in a position to affect what is communicated to other people.

How does it feel to be a part of the festival with your work?

It’s a little overwhelming actually. Everything happened so quickly, but it’s genuinely a joy to be a part of something so fantastic and important. Steven, Chris and the Bunker Team have created something vital and to have PYNEAPPLEbe a part of that is a remarkable feeling.

How did you both approach writing the show?

The work initially started as a monologue style piece, with devised scenes which merely stemmed from conversation. We took feedback from our audiences about what resonated and what they wanted to see more of and from this starting point, took the characters that emerged from that process (facilitated by Tesni Kujore) and created PYNEAPPLE. It’s been quite a tricky process, trying to write the script amongst our working schedules! It’s always been important for us to have varied opinions and black female voices within the work, and sharing the work with the Collective along the way has been a mandatory step.

It’s been a wonderfully enlightening rollercoaster of a journey. Learning what it is like to give birth to a piece of work, knowing your intentions and seeing how it speaks to and affects other people has been something valuable that we will take away from this process. There is so much room at the table, and what’s come through more than anything is the need for more work like this.

Audiences can expect plenty of laughs, maybe a few tears and really important conversations. The music is hot and the work is fresh!

Audiences really must take away whatever is revealed to them, whether it’s a different opinion that they never considered, a recognition of privilege or a simple reminder that they are beautiful regardless of what society tries to impose on them. But most importantly, understanding.

The best advice we can give is just to start. You can spend so much time procrastinating, but you won’t get anywhere if you don’t begin. Create concrete and strict deadlines for yourself and look for opportunities to create work. And collaborate! It’s a fantastic way to create.

« Previous post
Writer and Performer Remy Beasley talks about her show ‘Do Our Best’ showing as part of this year’s Edinburgh Festival Fringe 2019!
Next post »
Playwright Macadie Amoroso talks about her play ‘Blue Beneath My Skin’, showing at the ‘This is Black Festival’!