Playwright Macadie Amoroso talks about her play ‘Blue Beneath My Skin’, showing at the ‘This is Black Festival’! 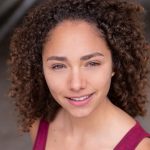 Addressing the lack of culturally diverse stories depicted on stage, Steven Kavuma’s ‘This is Black’ Festival gives voice to four new pieces of writing, offering a platform to varied perspectives of the black experience within the UK. Taking part in the inaugural new writing event, playwright Macadie Amoroso presents ‘Blue Beneath My Skin’, a show exploring the protagonist’s struggle with her mixed raced identity, and the struggles many of us face also. Ahead of the show, Macadie tells us more about taking part in Steven Kavuma’s debut festival, her creative process and what she’s learned from creating the show.

Hi Macadie, your show Blue Beneath My Skin is taking part in the debut ‘This is Black’ Festival at the Bunker Theatre. How are you feeling?

I’m feeling very excited and very nervous. I’ve never performed a one-woman show before, let alone my own show, so I’m feeling the pressure, but I’m absolutely over-the-moon to be a part of such a fantastic festival!

The show ‘explores the universal struggles of humanity’. What inspired you explore this topic?

Well, I wanted to explore my character’s struggle with her mixed-race identity, but I also wanted to acknowledge that everyone struggles with something. I felt it was impossible to explore her struggle without exploring that this is a fundamental part of humanity. Therefore, every character in the show that’s close to the protagonist has an issue of their own that they’re dealing with, hence the title Blue Beneath My Skin– everyone can feel blue regardless of what colour, race, gender, sexuality, ethnicity you are. It’s universal.

How does it feel to be a part of the ‘This is Black’ Festival with your work?

Incredible! I think what StevenKavuma(the curator of the festival) is doing is so important in giving artists of black heritage a platform to showcase their work in a safe and nurturing environment. He’s a genius! I can’t thank him enough for having faith in the five pages that I presented him at the start of this process, and I am so incredibly grateful to be a part.

When I came up with the idea for the play, I actually thought of the ending first, so it was a lot easier to find the path to the destination, as opposed to the finding the destination along the path if that makes sense. I knew I wanted to write about mixed-race experiences, particularly those who’ve grown up with influence from only one side of their heritage (something that’s close to home for me) and the impact that has on their identity. I also knew I wanted to write it in spoken word, as I’ve always been more of a poet than a playwright, so once I had the idea, it just kind of flowed from there.

Oh, so many things! This has been a huge learning curve for me – a lot of firsts, both professionally and personally, but I think one of the most poignant things I’ve learnt is that I can embrace the black side of my heritage without feeling guilty for doing so. As a mixed-race person, who’s grown up without the influence of black culture, I feel there’s often an element of feeling like a fraud for claiming sides of your heritage because you’re placed in a sort of “limbo”, but this festival has definitely taught me that I don’t have to feel that way about my identity.

Hopefully they can expect to be entertained, moved, surprised! They can also expect to see a story they haven’t seen before, discussing certain issues that aren’t talked about enough.

Hopefully it makes the audience think about the nuances of identity and what informs identity. I hope they come away feeling like they’ve seen something different, which took them on an emotional rollercoaster, while making them think.

Go for it! If you don’t see a story that you think should be told, tell it! Set yourself deadlines, sign up for things and say yes, so that you have to complete your work. I definitely have a habit of not completing things I start, so make it so you have to! Also, network. Meet and connect with people doing what you want to do. It’s the best way to make work.

Blue Beneath My Skin is currently showing until Sunday 25th August at the Bunker Theatre as part of the inaugural ‘This is Black’ Festival. To find out more about the production, visit here…

‘This is Black’ Festival, Blue Beneath My Skin, Macadie Amoroso, Steven Kavuma, The Bunker Theatre
20th August 2019by Theatrefullstop