Playwright Abraham Adeyemi talks about his play ‘All the Shit I Can’t Say to My Dad’ showing at the ‘This is Black Festival’! 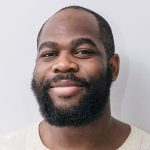 Addressing the lack of culturally diverse stories depicted on stage, Steven Kavuma’s ‘This is Black’ Festival gives voice to four new pieces of writing, offering a platform to varied perspectives of the black experience within the UK. Taking part in the inaugural new writing event, playwright Abraham Adeyemi presents ‘All the Shit I Can’t Say to My Dad’, a show exploring a strained parent relationship, differences of faith and absent fatherhood. Capturing the complexity of  parenthood and family relationships, Abraham tells us more about why he’s chosen to explore this topic, his writing process, and offers his advice to aspiring theatre makers!

Hi Abraham, your show All the Shit I Can’t say to My Dadwill take part in the debut ‘This is Black Festival’ at the Bunker Theatre. How were you feeling ahead of the run?

If I’m honest, I wasn’t as excited as I should have been! It’s been such an intense period; having my debut full-length play at the same time as making my film directorial debut so I’ve not been able to fully process it. I’m very grateful for it all, though, how can’t you be? I felt that, come the morning of the first show, the emotions would probably finally hit me but until then I just focused on continuing to get the work done.

The show is an ‘exploration of unresolved conflicts within a strained parent relationship, from differences of faith to absent fatherhood’. What inspired you explore this topic?

When we were auditioning for the play, 90% of the actors we auditioned – when asked about their thoughts on the play – mentioned that they could relate to the story and I found that so sad, that so many black men were coming into the audition room being able to relate to that story. But it’s the reality of it. In that sense, like any of my writing, I’m inspired by my observations of the world I’m seeing around me. As for differences in faith, I’d take one step out and say it’s just about differences as humans, period. Differences in morality, differences in politics, differences in the football teams we support! Differences are a good thing. Why can’t we accept the differences of others?

Well the show itself began with just a title, rather than an idea and – once I knew The Bunker were interested in programming it for ‘This is Black’ – I spent a month trying to figure out what the idea/story actually was and trying to fight my way out of having to write a monologue. The best and worst things I’ve ever had produced are both monologues and I guess it was that fear of a piece that fell into the latter category, but I knew, deep down, this piece could only ever be a monologue.

I received a book as a gift a few weeks before whilst in LA; it was an essay on Michael Jackson’s ‘Dangerous’ album by Susan Fast. I was casually reading that, and it turned out to be a great source of inspiration for the play. Reading that essay was how my protagonist became a musician because I was so enthralled by the analysis of the album and I kind of wanted to emulate the experience of putting an album together and what one wants to say through that piece of work.

From there, I wrote a vomit draft in two weeks and then yeah, just kept redrafting and redrafting. Each draft was read by my friend, playwright IfeyinwaFrederick, who gave me notes and that definitely sped up the play’s progress. People are always shocked to hear how early in my writing process I share my work but the way I see it is that the quicker someone eyes that aren’t mine land on the work and offer critique, the quicker the play becomes better. I think of it as a cheat code, to be honest.

More reinforcing learningsthan new learnings. I’m not sure I found anything. When my writing makes me cry, it usually means I’ve hit the jackpot. Also, I continue to surprise myself with how quickly I can write with the conditions I’m working within; things like balancing three jobs because rent still has to be paid, that I have the discipline a routine of waking up at 6am and sleeping at midnight to maximisethe amount of hours in the day. Things like that, but I already knew them.

My uncle always takes great pleasure in telling me that I’m not funny (which is fine, because I’m not a comedian nor a comedy writer) but I would say audiences can definitely expect to laugh. They can expect authenticity from the character, the story and the world. And they can expect devastation which, even now I’ve said that, they probably still won’t see it coming. Bring tissues!

Play whatever privileges you have to your advantage and be prepared to sacrifice to breakthrough. When I say privilege, it doesn’t have to be coming from a privileged background, from wealth or anything like that. It can be something as simple as being under no pressure to leave the family home so you don’t have rent and bills to pay. That links perfectly with sacrifice because most people who have the means to earn would do so but I believe it’s the sacrifices you choose (teemed with hard work) that separate the perpetual aspirers and the eventual achievers apart.

All the Shit I Can’t Say to My Dad is currently showing until Sunday 25th August at the Bunker Theatre as part of the inaugural ‘This is Black’ Festival. To find out more about the production, visit here…

‘This is Black’ Festival, Abraham Adeyemi, All the Shit I Can’t Say to My Dad, Steven Kavuma, The Bunker Theatre
20th August 2019by Theatrefullstop