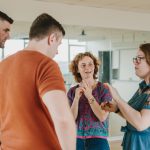 Hi Alice, your show Jade City is currently showing at the Bunker Theatre. How are you feeling about the run?

I feel great! I love and have a great relationship with everyone involved – the actors totally ‘get’ the piece and are giving it their all, the design is stunning, the producers are so dedicated, and the director has created a vision of the show beyond which I could ever have imagined. The Bunker have been supportive as well; I am really grateful to them for taking the show under their wing. I know that audiences will feel the passion that has gone into the show when they see it.

Based in Belfast, Jade City explores ‘the consequences of non-functional and uncaring governments and the effects on the people they have neglected’. What inspired you to explore this particular issue?

I live in Belfast, and I see and feel the affects of this issue every day. Belfast is a city with a myriad of issues and problems, but alongside that it has fantastic people. It can buzz with energy and an amazing potential.

With Jade City, I wanted to write the story of two people who’ve been affected by a society that has forced them to keep treading water to the point of exhaustion – this happens across the UK too, but Belfast is quite unique given everything we have dealt with since the 1970s.

Belfast is my home and I want it to be better, my role in creating Jade City is to highlight this issue.

I saw the world outside and wanted to get it on the page. When I am inspired by something I gather stories and characters related to it like how a 14 year old girl steals makeup from Boots. I’m relentless with it, guns blazing. This whole process is in the show.

In exploring these societal issues, have you learned anything new from creating the show?

I’ve learnt that lots of men don’t realise that most women are subject to some or a lot of sexual violence or harassment at some points during their lives! I found this really shocking, I mean, sexual harassment and violence are everywhere, right? But also, I always strive for truth in the characters I create, I hope I’ve reached new truths with Sas and Monty in Jade City.

Jade City has seen you work with Director Katherine Nesbitt to bring the show to life. How have you collaborated with her to do so?

Katherine came on board after I asked her to direct the script. I was looking for new collaborators and I was interested in what she was doing.  She helped shape the script from my early draft and helped workshop it and direct the first run which was at City of Belfast Boxing Academy. She’s always been super open and responsive and curious about my intention. I’ve really enjoyed working with her – it’s been great.

I want people’s eyes to be opened a little bit – to the ways we let people tread water in our society, but also the way we let men who’ve committed sexual abuse/assault exist within our world. I believe we need to confront perpetrators more, and recognise that they’re amongst us.

Write; by that I mean, don’t talk about writing. Do it. Find the time.

Jade City is currently showing until Saturday 21st September 2019 at The Bunker. To find out more about the production, visit here…