At Last @ The Lion and Unicorn Review

In a matter of weeks, Boris Johnson will foresee the UK leaving the European Union after three years of unpredictable twists and turns within parliament, as well as an extension from our original leave date, 29th March 2019. One of, if not the most significant of political decisions made post WWII, we face a post EU era of uncertainty. 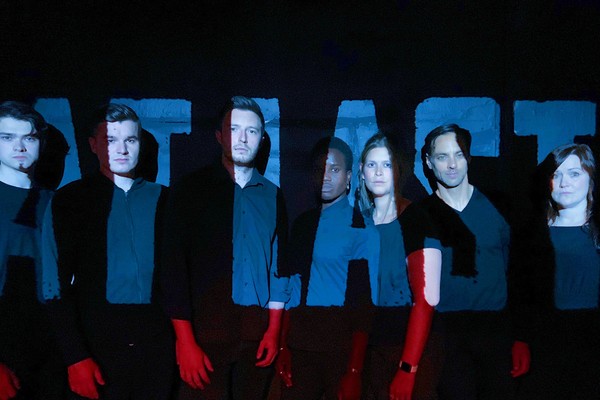 Proforca Theatre Company’s At Last taps into this pre-era of uncertainty, as news of the rise of the far right heightens, protests increase in response to various political issues and family members face being broken apart and contained within camps due to their migration status within the US. These very issues only go on to show a time of civil unrest, a time of division and this is of great concern, both nationally and globally.

At Last adopts an ensemble approach, the 8th June 2018 our starting point, and martial law the ‘accepted’ norm – ‘a new world’ dominated by protest, imprisonment and division. The production offers an alternate reality, a ‘what if?’ scenario, the audience constantly questioning whether this is actually as far fetched as it appears… this in itself giving the production a sinister underbelly. A Trump-like metropolitan is the evening’s setting, whereby truth seekers are punished for their bravery and honesty and survival seems to be everyone’s priority, no matter what that takes. We’re reminded of just how topical this production is, and even though this is theoretical, in reality, we’re already beginning to witness horrendous events on the world’s stage.

The normal, everyday civilian is given their chance to voice their experiences, we hear of families torn apart, protests, containment and what life was like prior the implementation of martial law. James Lewis and Alexander Knott begin to capture the unrest and tension felt nationally, turning attention away from the government (for once) and placing it on the majority who suffer the greatest impact of any weighty political decisions, in this case a post Brexit-esque landscape and its ramifications. At Last is ambitious in its wanting to highlight the lives of the many, but in doing so, there’s an emotional disconnect with the cast, due to many stories being told. The production however does leave you questioning what will happen next, and that in itself is powerful. 3.5/5

At Last is currently showing until Sunday 22nd September 2019 at the Lion and Unicorn Theatre. To find out more, visit here…