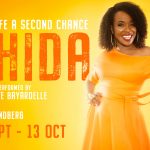 We all have our own stories to tell, our lives a mixture of circumstances and obstacles that have shaped our present. Inspired by a childhood friend’s tough circumstances, musical performer and theatre maker Jeannette Bayerdelle crafted her award winning one woman show ‘SHIDA’, a show focused on family, friendship and love. Currently showing at The Vaults, the recently Off West End Award nominated show integrates rock, R&B, jazz and gospel music to give voice to her friend’s story. Ahead of the run, Jeannette discusses her creative process, working with Joshua Zecher-Ross and Noam Galperin on the musical aspect of the show and what she’d like for audiences to take away from the show.

Hi Jeannette, your show SHIDA will show from mid September at The Vaults. How are you feeling about the run?

I am really excited about the run. We have had a great reception here in London thus far. The entire SHIDA London team is fantastic!

SHIDA ‘is based on the true story of a young African-American girl who aspires to become a writer, tracing the ups and downs of her family, friendships, and love life’. What inspired your creation of the show?

I was in the musical Hair on Broadway, and we got notice that the show was closing after an amazing run.  I was fortunate to have some great experiences on Broadway, but I knew I really wanted to follow that something special, and I thought to myself, “I should write a musical.” As soon as the thought came, I knew exactly what I wanted it to be about. Growing up in the Bronx, there were so many challenges that I faced or witnessed. I had a strict upbringing and was able to avoid lots of pitfalls, but of course, that was not everyone’s story. My childhood best friend had been through so much and overcame so much, I felt like I really wanted to tell her story because I knew it would empower others.

I asked the real Shida if I could interview her about her life, and then I would listen to the tapes that I made of her telling her story. The ideas for songs and dialogue started flowing.  It was an exciting time for me both personally and creatively. The inspiration and passion were strong, and we’ve continued developing the show in the years since.

SHIDA is a one woman show performed by yourself, with music supervision by Joshua Zecher-Ross and music direction by Noam Galperin. How have you collaborated with both to realise the show?

The collaboration with Joshua and Noam was seamless. They are both very talented and easy to work with. Our whole band is incredible.  It’s so fun sharing the stage with them every night!

SHIDA is your debut writing project, have you learned anything new about yourself as a performer and theatre maker?

To paraphrase a lyric in the show, I learned that there is so much inside of me. Developing this show has inspired me to continue to step out on faith and to explore and embrace all of my gifts.

Audiences should expect a beautifully intense roller coaster ride. Shida’s journey will inspire you and allow you to experience so many emotions. We hope you’ll laugh, cry, cheer, and clap – and then come back again!

At the end of the day, it’s a story of hope and overcoming, so I hope audiences will be inspired and enlightened. So often we see people in unfortunate situations but we don’t have a full understanding of what unforeseen circumstance have led them to that place. Shida gives you an inside look on the life of a girl who had big dreams but life got heavy and caused her to derail. Thankfully, she gets back on track and gets a second chance at life. Everyone could use a second chance, right?
What advice would you give to aspiring musicians and theatre makers?

Don’t be afraid, and never let anyone stop you!

SHIDA is currently showing until Sunday 13th October 2019 at The Vaults. To find out more about the production, visit here…