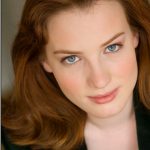 Irene Danner-Storm hailed from a family of circus performers. One of few Jewish families to own a circus business, the Lorch family would suffer greatly from the horrifying rise of antisemitism and the Nazis’ rise to power; the devastating climate leading to the beginnings of WWII. A decline in business and facing the possibility of being sent to a ghetto or concentration camp, Irene would be the first within her family to flee to the Althoff Circus as a means of survival. Inspired by Irene’s incredible story, performer and theatre maker Stav Meishar presents her solo show The Escape Act – A Holocaust Memoir, a production close to Stav’s heart, having trained in circus arts and being the descendant of Holocaust survivors, we learn more about how Irene’s story has impacted her both personally and professionally.

Hi Stav, your show ‘The Escape Act – A Holocaust Memoir’ will tour various venues, starting with Jackson’s Lane from late September. How are you feeling about the run?

They will be my very first UK performances, so it’s a very exciting moment for me! The fact that my UK debut also happens to be a show I wrote and one that stems from both my research and personal history makes it all the more exciting. It’s scary too, naturally – there’s a lot at stake and I’m hoping this tour will be successful on all fronts. It is such a massive project as we’re touring not only the show but also its additional components: a small historic exhibition at the lobbies of the venues, a lecture at the Jewish Museum in Manchester, circus works and audience Q&As. My hope is that audience members go home a bit more knowledgeable about the incredible histories of Jewish circus artists in WWII Germany.

The Escape Act – A Holocaust Memoir is based on the true story of Irene Danner-Storm, a Jewish acrobat who hid in a German circus during WWII to escape the concentration camps. What inspired you to explore her story?

I’ve always had a fascination with the Holocaust, both for national and personal reasons. I grew up in Israel where the Holocaust is omnipresent, not only in history classes at school but in our very national psyche as it is part of our collective identity. Beyond that, I am a descendent of Holocaust survivors and I always grew up in the shadow of the Holocaust, with names and photos of dead relatives floating around and memories lurking behind the corner.

As I started practicing circus arts in 2011, my interest in circus history came hand-in-hand. When I chanced upon Irene’s story it encapsulated all my interests: circus arts, circus history, Jewish history and social justice. I felt so fortunate to chance upon this story and felt it was my duty to learn as much as I can about it and make sure it’s not lost in history.

The first draft of the show, back in 2013, was an ensemble play. It made sense to write a show about a circus using a large cast. I originally envisioned each actor would bring different circus skills to the table and we could make this a contemporary circus-theatre show about a traditional circus. But as I looked into financing the show, I had to face some harsh realities about arts funding and my own limitations as a completely green producer. Thus, I re-worked the play as a one-woman show, reimagining all the other characters as puppets. It was a purely practical decision at first, acknowledging that touring a smaller show would be more cost efficient.

However, very soon this decision became less about practicality and more about concept as I realised that there is more to it. If I were to look at the WHY: Why am I telling this story? Why now? It was then that I weaved myself as a sort of character in the show, mixing Irene’s experiences with my own memories growing up a grandchild of Holocaust survivors. The show now has moments where Irene’s stories triggers my memories and I break the fourth wall, addressing the audience directly and sharing my own family’s stories.

It’s been a strange and twisty writing process, but I’m quite pleased as to where it has led to!

Has exploring Irene’s story had an impact on you personally and as a performer? If so, how?

Absolutely! This is only the 2nd play I’ve ever written, and the first one that has autobiographical elements. Researching Irene’s story and bringing it to the stage gave me the courage to face my own family’s dark past. It made me realise that this is the kind of art I want to make: raw, vulnerable, truthful and challenging. Art is meant to be the mirror held up to the face of society and I have no interest in making art that is comfortable. One can make performances that are both entertaining and thought provoking, both deeply emotional yet hopeful. Irene’s story is like that, as is this show. It feels like she helped me find my voice.

The tour will be accompanied by a public talk about the history of Circus Jews in Europe between the World Wars, interactive circus and drama workshops for all ages, audience Q&As and more. What can audiences expect from each of these events?

What all these events (the show included) share is the immersion in this other world: that of Jewish circus artists in Nazi-occupied Germany. This is a multi-faceted project where every element comes to educate, document and commemorate the lives of long-forgotten circus giants. While the show only focuses on Irene, my 7-year research spanned many other Jewish circus artists and families. The exhibition gives a taste of their biographies, while the lecture is an in-depth exploration of their histories as well as the process of transforming historical narratives into drama. The workshops include circus skills of the 1930’s and 1940’s and working dramatically with Holocaust survivors’ testimonies.

I think our first review described it pretty well: “The Escape Act – A Holocaust Memoir offered a rollercoaster of emotions where the audience felt everything from joy to wonder, worry and sorrow.” It is not an easy show to watch, and definitely not what one usually expects of a circus show. I’d like to think it is both painful and beautiful, both sad and uplifting.

There are quite a few puppets in it, as well as some trapeze and juggling, but it is mostly text driven. Audiences can expect to learn about some incredible circus history, as well as ponder the effects such traumas can have on following generations.

While the show deals mostly with events that happened decades ago, I think it is more relevant now than ever – in England and worldwide. With refugees knocking on our doors, with right-wing parties on the rise and a lot of fear mongering for all that is “different”, I’d like audiences to reflect on the relevancy of this story today. Bringing my own history to the show in front of new audiences every night is utterly terrifying and leaves me emotionally drained. But I do it because I want audiences to wrestle with the ripple effects that fascist and racist actions have, to weigh the social and political aftermath of what we’re doing.

What advice would you give to aspiring theatre makers and performers?

Originality is overrated, but authenticity is everything.

The Escape Act – A Holocaust Memoir has its UK debut from Monday 23rd until Tuesday 24th September at Jacksons Lane Theatre before going on tour. To find out more, visit here…

To find out more about Irene Danner-Storm and the Lorch Family, visit here…