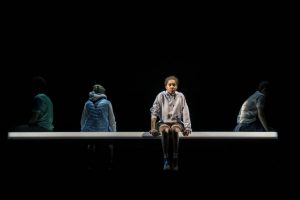 It felt rather monumental being in the room at the Royal Court last night. Caryl Churchill is without doubt one of our greatest living playwrights, and after amassing such a huge amount of hits under her belt, her latest offering is just as superb. Throughout the evening, four very different plays are presented. They discuss lots of interesting things: Gods, murder, clocks, magical creatures, addiction, accountability, perception – the list goes on.

Churchill is undeniably a master of words. Her ability to create and shape dialogue is second to none. The 2-hour long performance begins with GLASS, a story of a girl that few people can see. She is visible by sunlight and falls in love with a boy – who seeks to protect her in bubble wrap. However, this isn’t a simple story of teenage affection. It’s a multi-layered exploration of child abuse, told with the utmost delicacy. Rebekah Murrell and Patrick McNamee share a delicious chemistry, and really tug at our heartstrings. Their scenes together are a particular highlight.

KILL provides something completely different. Gods sit above their people, looking down at the misfortunes that occur and claim that it isn’t their fault. Sitting on a cloud – which has been designed expertly by Miriam Buether – Tom Mothersdale tells a monologue of how things came to be. His speech is appropriately paced and takes the audience on a real journey. The intensity builds, and the child below’s activity gets increasingly frantic. BLUEBEARD introduces four new actors into the mix. The setting is rather domestic: four people sit and debate the morality’s of their deceased ‘friend’ – who happened to be a notorious serial killer. Ethics are questioned, as are themes of consent, liability and risk.

In between these three plays there are two performance acts – a juggler and a hand balancer. These have been put in to hide the fact massive set changes are happening behind the curtain, but it also makes you distance yourself from the previous play – in order to completely focus on the next one. After the proper interval, there’s a final gift from Churchill: the one-hour long IMP. This is the story of two cousins that live together, whom each suffer from some sort of ailment. For Jimmy it’s depression and for Dot it’s anger-management. Their second cousin and also a homeless friend visit them frequently and it’s in these conversations that we get to see how complex their relationships are.

In all the plays the cast are exceptional, but it really is Deborah Findlay that excels the most. She is incredibly watchable, lives completely in the moment and never misses a beat. Her comic timing seems to come effortlessly, and despite being confined to a chair throughout, her physicality offers so much. The entire production is remarkable, and it really is difficult to fault it. In the space of one evening you experience so much. And you’re so grateful for it. 5/5

Glass. Kill. Bluebeard. Imp. is currently showing until Saturday 12th October 2019 at the Royal Court Theatre. To find out more about the production, visit here…