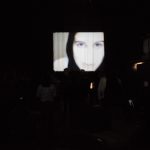 Within the UK, we  often find we learn and hear about international conflicts via the news, online and print media. The role of technology playing a crucial role in us all finding out what’s happening, yet simultaneously creating a barrier between us and those directly impacted by said conflicts. Drawing on the use of technology to report on such issues, Artist Caroline Williams talks about her show ‘Now is the Time to Say Nothing’, co-created with Syrian Filmmaker Reem Karssli and currently playing at the Battersea Arts Centre.

Hi Caroline! Your show Now Is Time to Say Nothing will show from early October at the Battersea Arts Centre. How are you feeling ahead of the run?

We are feeling excited to get the work seen by people in London. BAC is a special venue to me, as it’s where I trained as a young director, so it’s lovely to have the show come home to here.

The show is “an interactive sound and video installation exploring the role of screens in observing global conflicts”. What inspired you to explore this particular topic?

That there was a huge humanitarian crises happening and people were dying. And that it was easy to feel powerless in the face of all this news. The Arab Spring began with so much hope and so it was heartbreaking to watch from afar as that hope became more and more under threat.

Technology is integral to the show, utilising both sound and video installation. Why did you both feel it was important to present the show via these outlets?

Technology is the main entrance point for the UK public to conflicts happening abroad. We were interested in using this media and seeing if we could find a different way in to tell a more personal and intimate story. Could we use these tools which often disconnect us to the humans behind the news and actually use them to connect.

Caroline, have you learned anything new from the creative process and working with Reem?

I’ve learnt so much! I’ve made a new friend. I’ve collaborated over five years with an amazing artist who has taught me a huge amount about the importance of the every day. Reem has an amazing ability to find beauty in the small every day experiences of being alive. I have come close to learning what living though a war can do to people’s spirit and their sense of self. We’ve both been touched by audiences reactions and have learnt how warm and open so many people in the UK are and how much they want to help.

To get to know a Syrian artist who is incredibly brave and generous with her story. To be moved. To have a theatrical experience unlike what they’d expect from a theatre show.

That they are lucky enough to be alive.

What advice would you give to aspiring filmmakers, artists and theatre makers?

Don’t try to be like anyone else. Make work that you care about.

Now Is Time To Say Nothing is currently showing until Saturday 19th October 2019 at the Battersea Arts Centre. To find out more about the production, visit here…