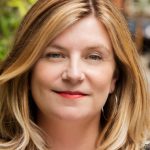 As times shift, tastes change, something we’re currently witnessing in regards to the role of the pub. Once the heart of local communities, we now find that 25% of UK pubs have shut down since 2001. Exploring what this institution means to different people, Anna Jordan’s We Anchor in Hope transforms The Bunker into a full functioning pub. During the show’s run, Anna tells us more about her approach in terms of creating the show, what she’s learned from writing the show and offers advice to aspiring writers!

Hi Anna, your latest show We Anchor in Hope is currently showing at The Bunker, how are you feeling post opening night?

Great. Everything has come together beautifully. It’s really a wonderful team of people who have made this possible.

The production ‘captures a moment of deep uncertainty in recent history and the characters’ lives when local pub, The Anchor, closes for good’. What inspired you to create a show exploring this?

As the play was originally written between the Brexit vote and Trump being voted in it is placed in a very unique time in history. It explores a moment of extreme uncertainty – in the world and in each of our characters’ lives. I did make a conscious choice not to update it to 2019 when Chris and I talked about bringing it to The Bunker. It’s a response to gentrification and the loss of civic spaces – pubs in particular – but equally a response to the housing crisis.

I’ve always wanted to write a play set in a pub. They are brilliant, frightening places.

It was originally commissioned by the Royal Court Theatre as part of Beyond the Court, back in 2016. Chris Sonnex was Associate Director at the Court then – and he sent me into pubs in Pimlico to buy drinks for people and talk to them about their lives, their area and what pubs meant to them.  Sounds like a cushy number but it was actually quite challenging

We performed it as a rehearsed reading at a pub on a housing estate in Pimlico in 2016 and it has been reworked for its premier at The Bunker in 2019.

It was a real labour of love. I wanted to explore what The Pub meant in this day and age and how the decline of the pub was affecting communities. Pubs mean many things to many people: a place to relax and unwind, a place for company and comfort, a place to let loose and go wild – and for some it is (literally or metaphorically) a Home.

Traditional boozers or local pubs are places of history and memories. I was particularly interested in exploring the intergenerational nature of pubs.

Initially created in 2016, the show was performed in a pub in Pimlico. How did you find this experience? How have you developed the play since?

Pimlico is a strange microcosm of London. On a housing estate one person may live in a social housing unit claiming housing benefit, and next door virtually the same flat could sell for half a million pounds – as it has been bought as part of the right to buy scheme, and successively passed from landlord to landlord. I wanted to explore some of these inequalities.

The play is a fictional piece in response to the many chats I had with some fantastic and generous people I interviewed in July 2016.  Having the opportunity to come back to the play means I have had time to delve further into the characters and play with the structure more. I’ve worked really closely with Chris and it’s been wonderful to have the time to get it right. (Although of course there is no “right”).

Have you learned anything new from the creation of the show, whether that be on the topic or on a personal level?

I’m learning all the time. I still feel like a rookie. I’ve learned a lot from Chris actually. And the actors. And also it’s reconfirmed what I already knew – which is that character and relationships are the most important thing in plays, at least for me.

It’s a play about endings and beginnings. It’s about memory, love and loss, it’s about relationships and community and of course BOOZE.

The Bunker has been transformed into a fully functioning bar in the performance space for the run so they can buy a pint on stage, play a game of pool and there are quiz nights and karaoke evenings each week too!

Maybe to think about the changing landscape of London and our cities in general, and to think about our neighbours and people around us who may need help even if it doesn’t seem like it on the surface. I want people to have a good night. The play is funny, hopefully moving, and ultimately uplifting. If pubs and theatre are two of your favourite things you get to mix them in one evening – perfect!

We Anchor in Hope is currently showing until Saturday 19th October 2019 at the Bunker Theatre. To find out more about the production, visit here…