After Der Fall Meursault – Eine Gegendarstellung and The Assassin, Iranian director Amir Reza Koohestani returns to the Kammerspiele with his own version of the Scottish play. 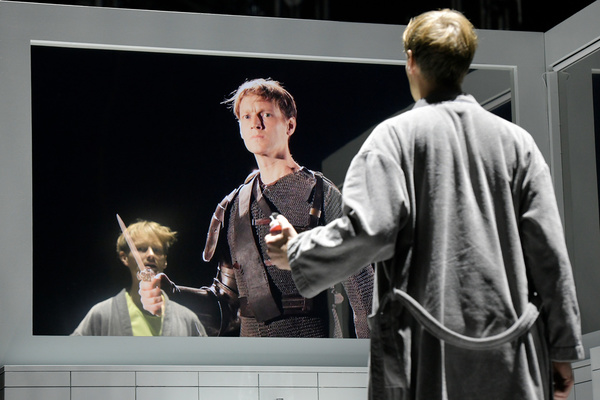 Koohestani believes that William Shakespeare originally wrote Macbeth as a propaganda piece that was meant to strengthen and confirm the position of the King. Using this idea as a premise for his production, Koohestani reflects on the relevance of theatre:  Can political power relations still be strengthened or questioned through fictional stories?

Before the performance begins, Walter Hess, who gives a fine performance as Duncan, informs the audience that the fake blood used in this most violent play should not do any harm because of its superior quality. After this short commercial for Beckmann’s stain remover, we are taken to a space where a director (Christian Löber) is rehearsing Macbeth. It is the final week before the premiere and the ensemble questions the relevance of staging a 400-year old play about an 11th century king. Lady Macbeth (Gro Swantje Kohlhof) has had enoughof the director’s antics and his dictatorial attitude. She leaves the production. Her replacement, an Iranian actor (Mahin Sadri), struggles with the German language but insists on using the German text. The director thinks that her performance would be more convincing if she says her lines in Farsi, her mother tongue. Eventually, Sadri’s actor informs the director that he has no idea what he is talking about because he has never even seen a bloody man in real life. How could fiction compare to this horror?

Koohestani’s version of the Scottish play takes place behind the scenes. There is no castle or great hall in this production. The revolving stage by Mitra Najmabadi switches between the director’s bedroom and the theatre bathroom consisting of a few toilets and a sink. The director, who is usually dressed in his underwear and a robe, shares both with his Ladies Macbeth. His private and professional life are one as he struggles with directing a doomed production in which he also plays the title role. Löber convinces as the narcissistic director, desperate, overworked and obsessive.

The ensemble experience many situations during the rehearsal process that allow them to switch from the mundane to the core text of the play. These scenes are rather powerful. Psychedelic video projections by Benjamin Krieg create beautiful images and creating a magical yet nightmarish atmosphere when Polly Lapkovskaja sings the chants of the witches as written by Shakespeare. White smoke rises from the toilets in the bathroom and white pillows float down from the fly loft, adding to the supernatural aspects of the play.

Stefan Merki‘s actor seems completely obsessed with his character Banquo, he cannot stop talking about his interpretation and ends up a bloody man sitting on a toilet bowl, possibly because one of his long-suffering colleagues has had enough, yet this could simply be Banquo’s fate.

Kinan Hmeidan and Kamel Najma are members of the Syrian Open Border Ensemble, which is part of the Kammerspiele, and although they are not actual refugees, they have been typecast in these roles. The director expects them to speak their lines as Donailbain and Ross in Farsi to bring authenticity to the production. Their objections are met with angry tirades so they eventually relent.

The weakness of Koohestani’s production is that it tries to achieve too much and falls short of its objectives. It is clever, with frequent insider jokes, but does not quite live up to the quality of Koohestani’s previous work at the Kammerspiele. 3/5

The production is in German, English and Arabic with English surtitles.