Our Lady of Kibeho @ The Stratford East Theatre Royal Review

“I am the mother of the word” replied a voice immediately recognised by Alphonsine Mumureke, a 16 year old schoolgirl in attendance at Catholic boarding school Kibeho College – as that of the Virgin Mary. This however wouldn’t be the only encounter Alphonsine would have with her, the voice later going on to predict the Rwandan Genocide of 1994, resulting in the deaths of roughly 1 million people, a seventh of the overall population. 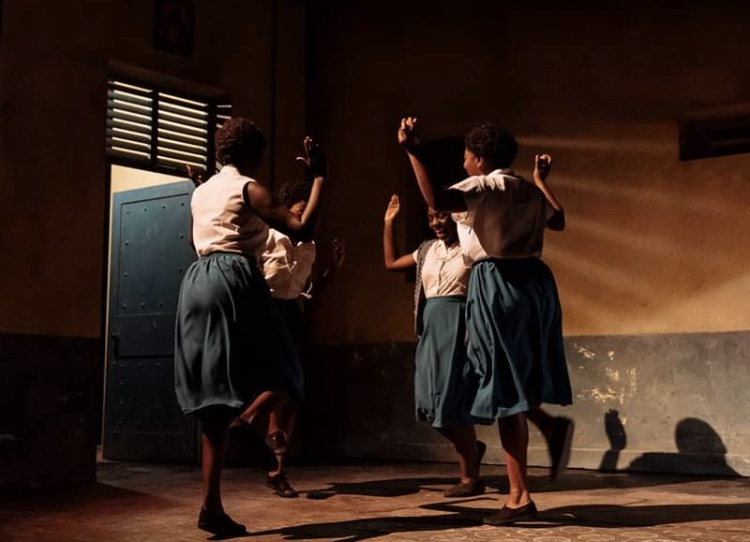 Capturing a story once told to her by a priest during a visit to both Rwanda and Uganda in 2009, playwright Katori Hall envisions the conversations, interactions and premonitions had by three girls in attendance at Kibeho College, amplifying their voices over the media’s often dismissive attitudes towards them in her production of Our Lady of Kibeho. Michael Henry’s musical direction stresses the importance of the voice, the underbelly of the production as the cast supply vocals throughout, their soulful tones embodying the show’s religious and spiritual element.

Taz Munya’s Alphonsine, Liya Summers’ Anathalie and Pepter Lunkuse’s Marie-Claire Mukangango bounce off of each other brilliantly, their often lighthearted, mundane interactions interrupted by the mean snipes made at one another – embodying an environment whereby paranoia and fear show themselves as the driving forces for their actions. Charles Balfour’s lighting design beautifully captures the production’s journey and tone, the warm climes of Rwanda contrasted with bright interrogation-type spotlights that at one point line up one after the other, like stepping stones. Claire Windsor’s sound design further emphasising the show’s sinister undertone.

Richard Dacre directs a haunting production that steadily becomes more sinister as the show goes on, this largely achieved by the hysteria created by the whole cast, Pérola Congo’s Therese, Rima Nsubuga’s Vestine, Aretha Aye’s Immaculee and Michaela Blackburn’s Evas  – who all question Alphonsine, Anathalie and Marie-Clare’s visions, yet display fear whenever the three girls become possessed. Dacre is able to spotlight Hall’s themes of youth, spirituality, religion, war and cultural heritage to present a part of history rarely told and this is powerful. A thought provoking, enlightening piece educating audiences on a part of Rwandan history. 4/5

Our Lady of Kibeho is currently showing until Saturday 2nd November 2019 at Stratford East Theatre Royal. To find out more about the production, visit here…