We’re living in a transformative time whereby conservative values are being challenged and quite rightly being left behind in a forward thinking world. It was only last year that India abolished homosexuality within Section 377, a law that criminalised same sex relationships. Globally, shifts are happening, yet there is such a long way to go in terms of LGBTQ+ rights, however there’s a feel that positive change is on horizon. 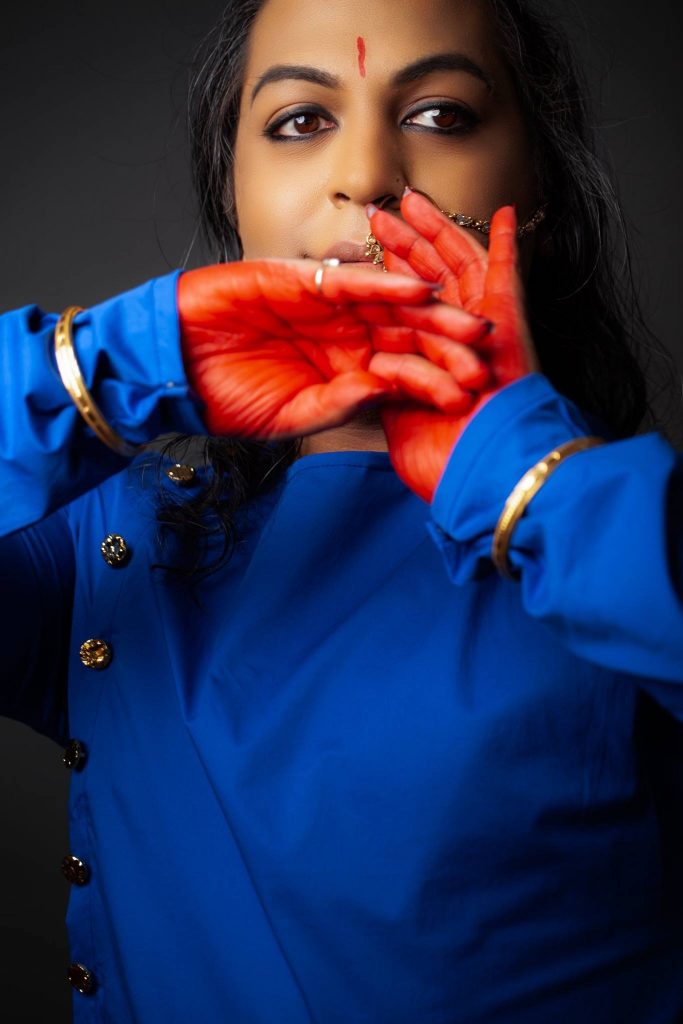 Drawing from this incredibly pertinent topic of sexuality, dancer and choreographer Jaivant Patel presents his story in Kathak/Contemporary dance fused performance YAATRA. An exploration of Jaivant’s own sexuality, spirituality and gender, YAATRA depicts two stages in Patel’s life; the initial stage (Awakening) is a questioning of his identity and the second stage (YAATRA) is a coming of age, acceptance in oneself. Patel mentions post show in a Q & A session with Tara Arts AD Jatinder Verma the importance of bringing elements of the ‘temple’ into whatever theatre spaces he performs in, this apparent from the very moment you step into the intimate Tara Arts theatre space as bells hang up above ready to oversee and contribute to the evening’s performance. A beautiful aesthetic to the evening’s performance that leaves all intrigued.

The initial act is heavily influenced by Kathak, Nahid Siddiqui’s choreography drawing from the ancient dance form’s openness to gender fluidity – Patel embodying the attributes of a genderqueer hero falling in love with a male god. Graceful ever-flowing arm placements highlight the dance form’s stress on the importance of not only embracing the space at eye level, but up above also. Contrasted with powerful footwork accentuated by the bells wrapped around Patel’s ankles, Kathak showcases its versatility, a form similar to other classical Indian dance forms isolating different parts of the body to bring out nuance within character and story line. A snippet of daily life in a short spoken burst brings us back to a time whereby conversations revolving around gender and sexuality were taboo, ignorant comments sadly a commonplace and accepted part of daily life but cringeworthy to listen to now, just going to show how we’ve moved on since.

The second act (YAATRA) is a more coming of age part of the production, there’s a sense that Patel is still exploring his identity, however he’s starting to become a lot more comfortable in his own skin and this is comforting to watch. Crafted by Patel, alongside Shane Shambhu, Urja Desai Thakore and Ben Wright, the show takes on a more contemporary feel, although there are elements of Kathak, which could signal cultural identity – a fusion of both Patel’s Southern Asian and British heritage and the very fact that he is embracing both. Hassan Mohyeddin’s compositions provide a comforting meditative layer to the evening’s honest presentation of Patel’s personal journey, peaceful in tone and delivery. YAATRA has the makings of a poignant and powerful piece, the subtle nuance in storytelling the show’s driving force that can be explored and heightened even further.  The post show Q & A adds a dimension to the show, it serves as a reminder as to how far we have to go still in terms of representation within the dance world especially, shows like these are important for reflecting stories within the wider world! 3/5

YAATRA was shown at the Tara Arts Theatre on Thursday 17th October 2019. The show is currently on tour, to find out more, visit here…