An aspect of humanity in which we all find ourselves having to deal with at some point or other is that of loss. How each of us deals with mortality is unique to our own personal experiences. How loss is dealt with and viewed upon is also determined by one’s cultural norms and practises – Gregory Maqoma’s Cion: Requiem of Ravel’s Bolero observing the role of a professional mourner – a role originating in Egypt , China, Mediterranean and Eastern cultures. 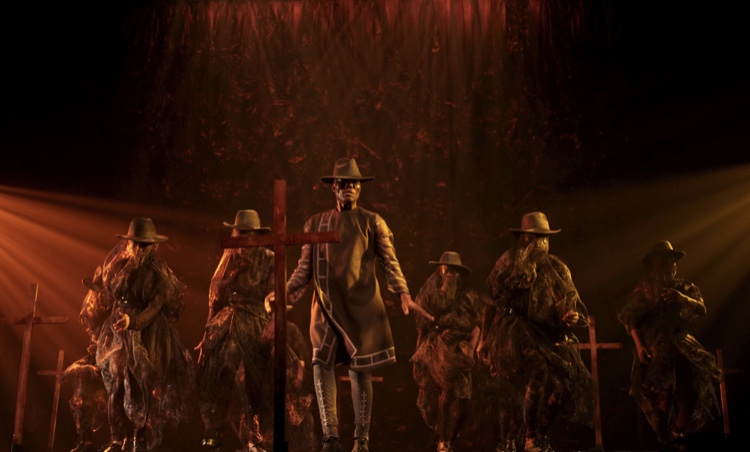 Cion observes ‘a universe in which greed, power and religion lead so often to the normalisation of death and loss’, Oliver Hauser’s minimalistic stage design – consisting of wooden crosses scattered around the stage hauntingly supporting these factors. Emblematic of the Christian faith, Hauser effortlessly delivers a religious undertone to the show that gives the evening its ethereal, spiritual edge.

Maqoma’s nuanced choreography delivers an unforgettable evening of physical storytelling, a subtle wailing from a member of the ensemble at the show’s beginnings drawing all into the performative element of a professional mourner’s role within a funeral ceremony. The evening starts as it means to go on, group work, formations and solo routines drawing out a funeral’s order of service – from families gathering to processions to eulogies expressing final goodbyes. Maqoma’s fusion of Contemporary, Southern African and locking channelling the evening’s heartbroken soul, calling out for those involved to grieve and dance the pain away.

Siphiwe Nkabinde, Sbusiso Shozi, Simphiwe Bonongo and Zandile Hlatshwayo’s musical storytelling gives Cion its heart. A rendition of Ravel’s Bolero providing the audience with a sense of familiarity. The ensemble are one and that’s clear to see, working together seamlessly whilst simultaneously contributing stand out moments – and that’s exciting to witness. The evening is ever moving, vigorous, energetic and a mixture of sorrow and happiness – the evening’s vibrant notes punctured by a rare moment of speech, bringing to home the show’s spiritual element and drawing back to themes of greed and power as we’re reminded of the ramifications of war. An effortless tap routine, which sees all draped in black lace defines the evening’s concluding act. Staged in a triangular formation, the ensemble gradually pick up speed, their feet taking on a force of their own – awe inspiring. Otto Andile Nhlapo, Rosaline Wilkens, Thabang Mojapelo, Smangaliso Ngwenya, Katleho Lekhula, Itumeleng Tsoeu, Lungile Mahlangu, Ernest Balene and Nathan Botha provide a masterclass in physical storytelling, each bringing a gravitas that leaves you enthralled throughout the entire performance. 4.5/5

Cion was shown from Thursday 17th until Saturday 19th October 2019 at the Barbican Centre. To find out more about the production, visit here…