Singer/Songwriter Samia Malik talks about her latest performance and Album Launch at Richmix! 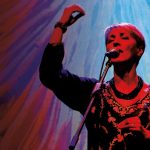 Inspired by her bilingual upbringing and identity, Singer/Songwriter Samia Malik recalls the songs from Bollywood films and Urdu Ghazals (a traditional poetical form originating from various Southern Asian cultures) that have inspired her creative process for her upcoming album. A celebration of world music, Samia will perform a varied set, joined by guitarist Giuliano Modarelli, multi instrumentalist Sianed Jones on violin, keyboards and bass guitar and renowned tabla player Sukhdeep Dhanjal. Ahead of the tour, starting off at Rich Mix London on Sunday 27th October, Samia tells us more about what to expect!

Hi Samia, you’ll be embarking on a UK tour performing and launching your album from late October. How are you feeling ahead of the performances?

Equally excited and terrified! OK, maybe more excited now! It’s an incredible line up and I am delighted to have the chance to present this work to diverse audiences across the country. Supported by the Arts Council, the tour datesare: 27thOctober RICH MIXLondon | 7th/9thNovember BANK ARTSEye, Suffolk | 16thNovember WORLD UNLIMITEDNewton Abbot, Devon | 28thNovember KALASANGAMBradford | 29thNovember MACBirmingham.

Songs performed will be sung in both Urdu and English and based on traditional Urdu Ghazal. What inspired you to explore this particular form?

I grew up in the UK listening to Bollywood film songs and Urdu Ghazals so it’s always been part of my life,though my family were not particularly musical. I am bilingual so it seems natural to use both my languagesin my songwriting.

In terms of content I was greatly influenced by the legendary Indian director Guru Duttwhose films explored themes such as love, integrity, art, class, hypocrisy and politics. I loved the voices of both Geeta Dutt and Begum Akhter, and the incredible political poetry of Faiz. When I was 15 I discovered classical Indian music in the film Baiju Bawra, and was inspired to learn about this traditional music. But women from my background are not allowed to sing, especially not in public, so there was no chance then of any training or learning. I just continued to listen and enjoy the songs.

Many years later, in my late twenties and as a single parent, I finally followed my dream and I was lucky enough to be taught in London by the great Baluji Shrivastav OBE. For a number of years I trained in Classical vocal techniques and then began using this knowledge of raagand taalto create my first compositions for poems published in We Sinful Women – Contemporary Feminist Urdu Poetry (1991). Feeling that these poems, through thrillingly powerful and inspiring, did not explore my own experiences of being an Asian woman from a Pakistani, Muslim background who grew up in the UK, I began to write my own songs, focusing on issues of race, gender and identity.I was surprised when what I wrote came out as Ghazal form. I realised you can take the girl out of Pakistan, but etc etc!!

Much later, I did a visual arts degree. Films of translations and projections of visual art now support my live songs to make the meanings clear to non-Urdu speakers.

Your performances will explore issues around identity, race and gender.  Why have you chosen to explore these particular themes?

My work, both as a singer/songwriter and as a visual artist is completely informed by my personal of being an Asian woman from a Pakistani, Muslim background who grew up in the UK. However, it is interesting how very diverse audiences have identified with the themes I explore. Music and art can unite us. Through my work I try to question the motives of those who seek to separate us from each other. Music and art can teach us that we have more in common than that which divides us.

Your performance will see you accompanied by guitarist Giuliano Modarelli, multi instrumentalist Sianed Jones on violin, keyboards and bass guitar and renowned tabla player Sukhdeep Dhanjal. How was the band assembled? How have you worked together to realise the performance and album?

I have collaborated with the incredible artist Sianed Jones for many years, since she saw me performing my songs as a young woman while accompanying myself on a dhole (which is a simple Indian drum). She invited me to tour with her then band Slant, and they learnt my songs. Then I asked her to tour with me, and Sukhdeep joined my then band Garam Masala. We toured throughout the UK and in Europe, but then I had a break from performance to do an Arts degree. When I began to tour again, Giuliano Modarelliwas introduced to me through Sukhdeep– last year we managed to develop the work together and recorded the CD along with the extraordinary pianist Al MacSween.

So for this tourand also for the albumI have the utter and immense privilege of working with some of the best artists in the world. It’s very much a Supergroup!

You’ll be accompanied by special guest NX Panther who’ll be performing their debut EP Black Forest Ghetto. What inspired you to invite the collective?

I think it is great to share the love! Seriously though, I have had my eye on Alia for some time and we have discussed working together, so watch this space!

There will be a post show Q & A session run by writer and activist Amrit Wilson. What can be expected from the session?

I am particularly excited to be having the Q&A session in Rich Mix facilitatedone of my all-time heroines Amrit Wilson.Q&A is a really important part of the performance – where I hand over to the audience. It is amazing what people want to discuss, to ask, and it is veryinteresting to me how very diverse audiences have identified with the themes I explore. These open Q&A sessions have thrown up such interesting issues, from these songs reminding people that this is indeed ‘one world’ to discussions about race, culture, belonging, history, connections, the past, our turbulent present and uncertain future. I have no idea what she will ask me, but she knows my work well and we think alike on many important contemporary issues. I think that will be thrilling part of the evening.

What would you like for audiences to take away from the evening?

Firstly, and mainly, to have had a bloody good time! I want them to be moved and inspired and entertained and motivated and feel connected and understood and understand more. I want their hearts to be just a little bigger…

What advice would you give to aspiring musicians and singer/songwriters?

But you know,I am most free in my studio. I fly. And if we truly look, if we don’t try to find the polished gem, we just look for the raw feeling, the emotion, the passion, the pain, the anger, the joy… then it comes. When I deliver songwriting workshops, that’s my aim – to get people to be really free. That’s when the magic comes! You can (and must!) polish it later.But be free to start with.

Samia Malik will be performing on Sunday 27th October 2019 at Rich Mix London, before embarking on a tour. To find out more about the performance, visit here…

To find out more about the tour, visit here…