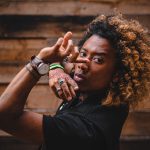 Certain Blacks return with their latest festival, ‘Circus Circus Circus’, a mixed programme of live art, spoken word, jazz, opera and circus. An eclectic performance line up, Certain Blacks continue on their mission to showcase works exploring themes via various theatrical forms. Bringing his and Marv Radio’s latest show Hip Hop Palace to Rich Mix London on Thursday 7th November, Dance Artist Muti Musafiri and Marv’s production is an exploration of the values of Hip Hop and how very often popular culture tends to hijack elements of it without knowing enough about the multifaceted culture. Muti tells us more about the show!

Hi Muti, you’ll be taking part in this year’s Certain Blacks’ Circus Circus Circus Festival on 7th Nov with your show Hip Hop Palace. How are you feeling ahead of the performance?

I‘m feeling a rising tide of emotions, for we are standing here holding all the components and as we step into our moment to shine, we will be the vessel to remind us all that it is truly our time. For this is bigger than me, this is an opportunity to clear the negative association of the hip hop and all its dreams. As we reclaim our power of the mind and bring the power back to the people. In a new generation of hip hop, as ‘Masters of Ceremony’; what we speak into existence, what we call into space can awaken the minds of the people in all their tastes. I feel grateful and honoured to have this opportunity to share this message with a new audiences and express the legacy of all those who came before us and will come after.

As our 2nd Production this year Hip Hop Palace covers all aspects of a culture we all love and have been housed in. There are so many rich elements to the show, I hope everyone can open their hearts to receive them, even if the subject matter is harsh, at least it’s real.

Hip Hop Palace is an exploration of how the ‘values of Hip Hop’ are often hijacked by consumer culture. What inspired you to explore this further?

It’s the 21st century and it’s about time the OG’s passed the torch down, as a new generation lifts up the mantle as a platform to speak our renewed truth. We need new role models who stand for something more than just ‘Cars, Money Hoes’, let us pronounce ourselves from the inherit wisdom of our forefathers & clear all the injustice within our conditioned natures, Let us reclaim our minds and find our spaces within our community to nurture our ideas, our visions and express our truths, through the lens of hip hop which has been so misappropriated and it‘s about time we renew our reflections to this transformational engine we called Hip Hop.

Let us innerstand within the nucleus of this message, to bring royalty back to Hip Hop and restore its royalty within our hearts and minds.

The show sees you collaborate with sound artist and theatre maker Marv Radio – how have you both worked together to create the show?

We have scripted a narrative from all areas of our expertise & collaborative genius, where we see unique character interface with real life subject matters to overcome their poor mentality as they inherit their true royalty in triumph of innerstanding their true power. This came from a process of referring to our own journey’s with hip hop, and how we related to one another. I have been working closely with the performance artists to develop their characters and bring another dimension to their performance through lighting, costume and constantly referring the artists back to the brief and asking them to dig deep into their ‘rag to riches’ stories. Marv has been working with the soundtrack elements, bringing his flavours to the narrative to tighten transitions between acts as we weave together this grand tapestry which is Hip Hop Palace!

Have you both worked together before? How have you found the collaborative process?

Well we have previously collaborated on a performance production named First Light which went to Edinburgh Fringe Festival and this is where our collaborative journey began. I was the Movement Director for the production and Marv was the Musical Director, in this we found an archaic marriage that has lasted from the beginning of time; Sound + Movement allows us to harness our power and free our expression. Since then, Marv Radio has been a sound designer of one of my productions King’D’Om with my company InForMotion and I have movement directed an extract of his one man theatre piece Mantra which we previously self produced at Edinburgh Fringe as part of the Free Fringe in 2018. We are both constantly growing as individuals and as a team, in our journey through mental health; earlier this year we started running Men’s Circles together. One foundational element we feel is most important is to be present with the human aspect of our relationship before the business, as emotional well being and mental stability is our priority as brothers as well as business partners.

There is never enough time in the day, delegation is key.

Expect to feel inspired by magnificence, enhanced by similarity & not the difference. Filled by our hearts ability to listen to stories of embodied wisdom as we share our visions.

A sense of their own Hip Hop flavour and outer vibrancy, filled with a fresh palette of colours to serve humanity in peace, love and unity and inspire more beings in the remainder of their week.

What advice do you have for aspiring dance artists and theatre makers?

Create the opportunities that the industry isn’t giving you. Don‘t wait for someone to hand you your dreams, only you can take them. Explore your truth with like-minded beings then innerstand your truth for all to see. Rise in love, it’s a journey not a distinction in this profession.

Hip Hop Palace will show on Thursday 7th November as part of this year’s Circus Circus Circus Festival at Rich Mix London. To find out more about the production, visit here…