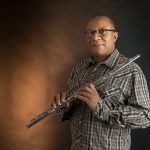 Hi Rowland, you’ll be taking part in this year’s Certain Blacks’ Circus Circus Circus Festival on 9th Nov with your show London Art Collective. How are you feeling ahead of the performance?

I’m very much looking forward to is taking part having performed with Cleveland Watkiss MBE and Byron at previous events by the same organisation. It will be uplifting and energising to express ourselves to the audience through spiritual, modal, cosmic jazz and free improvisation. It is looking like being such a vibrant and adventurous festival.

London Art Collective will showcase an evening of ‘spatial, galactic and spiritual jazz’. What inspired you to create a show exploring this musical form?

I’ve been leaning towards steering the collective through a wider realm of spiritual jazz and improvised music and will be intertwining the two with each other.

It all stems from having been inspired by the organisation AACM, Sun Ra, The Art Ensemble of Chicago and the Vienna Art Orchestra, among other similar setups and some of their otherworldly highly spirited ventures.

The show sees you collaborate with sound artist and theatre maker Marv Radio, how have you both worked together to create the show?

This performance at the Rich Mix on 9 Nov marks the first time that we both share the stage. We will perform our own sets which will compliment each other.

Orphy Robinson, Pat Thomas, Rachel Musson, Ansuman Biswas, Alec Dankworth and Mark Sanders amongst others form the London Art Collective. How was the collective formed and what has the collaborative process involved?

The London Art Collective actually came into fruition in 1999 after I received an invitation to headline a very special homage to Sun Ra event called Sounds of Joy, which took place throughout the Scala venue in Kings Cross, London.

The venue was filled with Sun Ra movies, dishes, vinyl, CDs and all manner of Sun Ra memorabilia.

It was a very memorable day.

Since the fairly early days of playing in the Jazz Warriors Orchestra with Orphy Robinson just after the mid 1980s. Then there were a large number of projects which both myself and Orphy led and we often collaborated with each other.

I then also ran projects where I would collaborate with Ansuman Biswas and at other times with Pat Thomas too. Since the 2000’s I have also collaborated with Mark Sanders and then later on with Rachel Musson. All of whom are also active in the improvised music scene.

With the affinity and rapport we have, it was only natural for these superb artists to be a part of the London Art Collective. There are a number of other wonderful soloists involved too.

The performances are continually growing and evolving. They are becoming more and more musically enhanced.

Come with an open mind. Often audience have felt enriched and uplifted during our shows. The energy is positive. We strive to travel through a range of emotions from turbulence through to the sublime.

A feeling of positivity and hope. To feel energised and to also embrace the music of the composers who’s music we feature.

What advice would you have to aspiring musicians and composers?

Be focused. Set goals to strive for. Be dedicated to your art and nurture it as well as you can. Take on board a wide range of good advice.

London Art Collective will show on Saturday 9th November as part of this year’s Circus Circus Circus Festival at Rich Mix London. To find out more about the production, visit here…