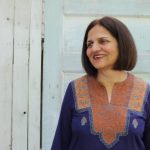 Can a place ever be home without a connection to family and roots? asks Rukhsana Ahmad’s current show Homing Birds. Focussing on Saeed’s story, we learn about the journey of many Afghan refugees forced to flee their homeland to avoid the dangers they find themselves confronted with; a heartbreaking repercussion of this being the disconnection of families and roots. How can one even begin to trace their own history having lost that connection? Homing Birds will play at Tara Arts from late November for a limited run; ahead of the performance, Rukhsana tells us more about what inspired her to write this story, how she approached creating the show and working with Kali Theatre Company to develop this from a scratch performance first shown in their War Play season in 2017  into a full length production.

Your show Homing Birds is currently on tour, having already visited Plymouth, Salisbury, Hornchurch and Leicester. It is yet to visit London. How are you feeling midway through the tour?

Audiences have received the play very warmly, so it’s been gratifying to visit Plymouth and Leicester for the two shows that I attended. London is always daunting but I’m now less apprehensive than I was at the start of the tour. It’s a busy time with Christmas round the corner and the distraction of Election 2019, but I think audiences will respond to the quality of the production and the glimpse into other lives and places that it offers.

Homing Birds ‘follows the journey of Afghan refugee Saeed who desperately wants to reconnect with his roots and find his long-lost sister’. What inspired you to explore Saeed’s story?

Saeed represents the ultimate desperation that drives refugees. Sent off by his family as an unaccompanied child, he is on the extreme cusp of it – but he also epitomises for me the longing for the past, for the mother country that afflicts all migrants whether they are professionals, student-lingerers, fortune-seekers or those yoked to a host country through spouses and partners. As someone who adopted this country many years ago, this is a condition that I share with him alongside the double vision that resists the limitations of a single perspective and prompts an internal resistance to every moment of experience.

With lots of fear and anxiety, I’m afraid. More than is usual for me, as I am not an Afghan and soon realised how easy it is to blunder. Every Afghan that I know is not the kind of refugee who is my main protagonist. I love writing and, undoubtedly, it’s a privilege, but I am a fearful procrastinator so I spent much longer on research than I needed to: I read books about the country, the war, refugee stories, novels, research papers and newspaper reports. I visited websites and blogs to try to learn as much as I could. Nadene Ghouri’s two books: The Favoured Daughter and The Lightless Sky were inspirational for me,

How have you worked with Kali Theatre to realise the show?

The seed commission was for a short piece written for Kali Theatre Company’s season of  War plays in 2017. It was an angry and sharp protest against war that captured its violence and futility but offered little room for hope. Revisiting the subject with the support of my talented director, Helena Bell and an expert dramaturge: Suzanne Bell, I found ways of connecting with the characters I had created for that piece, which transformed it into a story about strategies for survival. That’s all refugees bring with them when they are forced out of a homeland that should be protecting them, but has failed to do so. The hazardous trek on which they embark does not often lead to success.

For me, every piece of writing has always been a journey and this has certainly been another wonderful experience: an exercise in my craft that has nourished my writing skills and rekindled an enthusiasm for the process. I think it’s made me learn how to edit myself better and extended my research skills.

Authenticity, I think. It’s a good story; that is one of my strengths as a writer. And it is told by some wonderful actors with tremendous skill – of a level that is rare on the fringe. The set is subtly artful, the lighting is excellent and the sound design does transport you to another world.

I don’t think we as makers can dictate or control that. What people take from a show reflects what they bring to the theatre as much as what is offered to them. All I want is for audiences to open up their hearts to the story and I hope the play will speak to them.

Have faith in yourself and in your art and be truthful to both, even if it hurts. That is more important than any perceptions of success.

Homing Birds will show from Tuesday 26th November until Saturday 7th December 2019 at Tara Arts. To find out more about the production, visit here…

To find out more about Kali Theatre, visit here…