Despite compelling performances, Hunger leaves a certain something missing. While there are moments of brilliance and a clear attention to detail, I want this show to leave a few more questions unanswered. 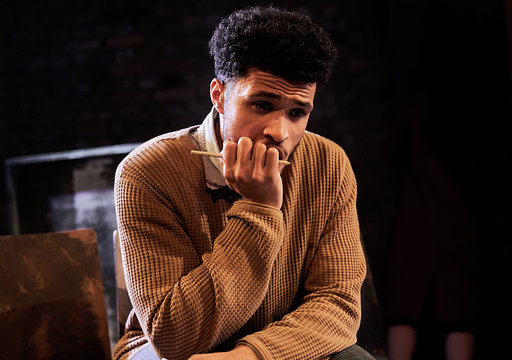 Following the story of The Young Man (Kwami Odoom) as he falls unstoppably into the spiral of poverty, hunger and eventual insanity, Hunger manages to maintain an uncomfortable awareness of the issue at hand, rather than emotional relationships. This is necessary because a one-dimensional, romanticised representation of homelessness and hunger would not do justice to the narratives. Making full use of the Brechtian Epic approach, multi-rolling and provocative physical sequences create a powerful point about the relentless and unforgiving movement of time.

Odoom is joined by a wide range of characters, skilfully performed by Jessica Tomlinson, Katie Eldred and Archie Blackhouse. While this occasionally makes for a lack of depth, it immerses the audience in the emotionless and uncaring whirlpool society creates for those who do not comply and while the ridiculously arrogant bourgeoisie characters do veer into comedy, it does a good job of making the blood boil.

There is an unsettling universality in the ambiguity about the problems facing people who become unstable, this is used to great effect, however, the frequent vagueness means that it doesn’t always hit the mark. I wonder if they are aware of this, because this is followed by very on the nose dialogue which gives answers for the questions it poses about intimacy, how to retain sanity and how to acknowledge that you need help.The play is disorienting at times, with the multiple narratives often feeling unnecessary, and sometimes we lose track, although this may be the point.

The attempted compensation for the vagueness results in signposting the message about the unemotional treatment of people losing stability. This frustrates me because, arguably when a show allows the audience to think for themselves it has a much greater effect. This is then proved by a breath-taking final stroke of genius which leaves you with disturbing implications to think about. The show is therefore at its best when provocative, but not conclusive because many of the questions raised are unanswerable. The introduction of the mysterious woman in black is brilliant, with possibilities ranging from an angel of death, to a caring stranger but this is never allowed to remain uncertain.

All in all, this show is important in its relevancy and loudly states the issues of people whose voice is often rejected. As long as you don’t look into the politics of the original writer, it is a story that needs hearing and this tells it in an powerful, compelling way. 3/5

Hunger is currently showing until Saturday 21st December 2019 at the Arcola Theatre. To find out more about the production, visit here…