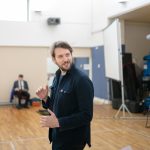 Hi Jesse, your show ‘Messiah’ will run at the Stratford Circus Arts Centre from 27th to 30th Nov before embarking on a tour until Jan. How are you feeling ahead of the run?

Nervous. It’s big task to do justice to any real person, let alone an important historical figure. There’s a lot riding on the show and we’re very aware of the stakes.

Messiah is based on the short life of Black Panther Party member Fred Hampton. What inspired you to explore his story?

Despite Fred’s short life, we’re lucky to have a considerable amount of footage of him (there was a documentary crew making a film about him at the time he died). It was watching one of these recordings of him, totally by accident, that I was drawn into how contemporary he felt. Like someone has taken a modern piece of footage and turned it into black and white.

Co-written with Paula B. Stanic, how have you both approached creating the show?

It was an experiment for both of us. We started with the source material (Fred’s life and the events surrounding his death), but before we wrote anything we brought actors in to improvise potential scenes. It was these initial explorations that formed the basis for the writing process; a process that continued to use workshops with actors throughout.

You’ve also directed Messiah, can you describe the rehearsal process?

Intense! The story is very dramatic – and hopefully the play is too! – but there is another level of intensity when the full cast and company are so invested in the background. It’s also the first time this story will be told in this way so there’s lots and lots of changes that keep happening. It’s very much a ‘live’ piece of work!

I’ve learnt new things about theatre, my own process, my relationship with my own ideals, and how those differ from the experience of others. It’s been a really steep learning curve and I’m very grateful for it. The process has allowed me to interrogate why I believe what I believe, and how that might have been shaped by forces outside of my control.

A tense, thrilling hour. And perhaps more laughs than you expect.

I’d like audiences to take away an increased awareness of remarkable opportunity we have just by being alive now. How precious and personal that is.

What advice would you give to aspiring playwrights and directors?

Ignore established structures. Get closer to your audience. Accept failure is part of the process. After your worst day, turn up again. And above all: get good people into the room and listen to them.

Messiah is currently showing until Saturday 30th November at Stratford Circus Arts Centre and will embark on a tour until January 2020. To find out more about the production, visit here…