Once every few years, a show will arrive on the London stage which genuinely warrants the description “must see”, a show which asks fundamental questions about the act of theatre itself; what it can be, and what it should be. 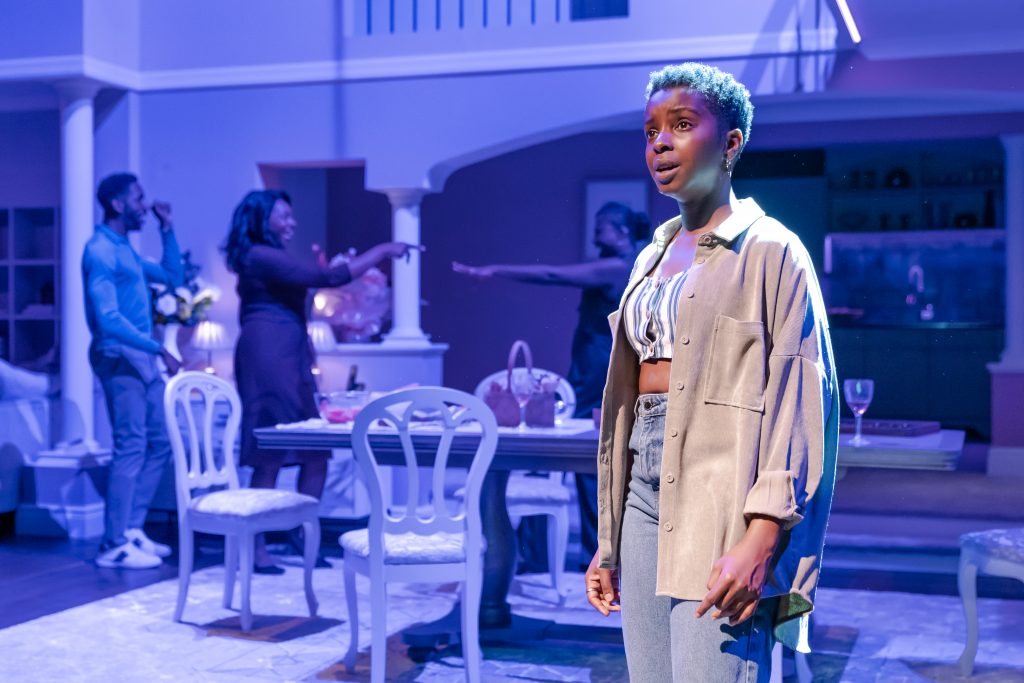 In 2012 there was Three Kingdoms at The Lyric, followed by Mr Burns at The Almeida in 2014: two shows staged under a mix of fanfare and mystery, pursuing a formal radicalism that didn’t so much as divide audiences but wrenched open a chasm between them. Few shows elicit such oppositional reactions, but fewer still foreground this divide with such immediacy, and with such potency, as Fairview.

Originally commissioned and presented by New York’s Soho rep with Berkely Reportory Theatre, and awarded the 2019 Pulitzer Prize for Drama, Jackie Sibblies Drury’s play arrives at The Young Vic with no shortage of attention.

The characterisations are broad, the décor is eerily perfect, the dialogue is snappy, and the well-tuned site-gags come thick and fast. It becomes swiftly clear that what we are seeing is not aiming for a representation of life as it is, particularly when the family break into dance routines with almost telepathic precision, and these uncanny details, although entertaining, gradually combine and accumulate to unsettling effect, enough to suggest that all is not quite as it seems.

It is of course not life we’re seeing, it is a world that clearly alludes to African-American centred family sitcoms, and the representational tropes within, of which The Fresh Prince of Bel Air is probably the most well-known reference for Brit’s of this writer’s generation. There are also self-aware ruminations upon cultural depictions of family life for people of colour, and questions on the impact of such representations upon the lives they claim to depict.

So far, so engaging, but within 20 minutes I start to brace myself for whatever formal diversion will indicate the true nature of what is in front of me. Nothing, however, can prepare me for the gear-shifts Jackie Sibblies Drury’s play takes over its latter two thirds.

I am under strict orders from the Young Vic not to reveal too much about what follows, and rightly so. What I can reveal is that the second act turns the entire sitcom conceit on its head. The action on stage is reframed, and revealed to be not so much an insight into African American family experience, but a commentary on the white-gaze and its cultural primacy; providing a potent illustration of the alienation people of colour face when their stories and identities are filtered through this dominant structure.

As the play progresses, the bold formal manoeuvres continue, and the latter third is frankly jaw dropping in it’s audacity.

Like Mr Burns and Three Kingdoms before it, Fairview is concerned with the process of storytelling itself, a story about a story if you will. As such, individual characters are ultimately irrelevant, and the collective becomes a vehicle to show a story’s journey through the social fabric. While Mr Burns traces the upwards arc of such a story, it’s heroic persistence through multiple generations and adverse circumstances, Fairview shows us a story’s tragic downfall, torn away from its true origins, hijacked and taken for a joyride. Fairview demonstrates with stomach churning clarity how the agency of people of colour is consistently eroded by a white gaze, which ensures they are cast as object, rather than subject, even in their own lives.

I must of course repeat a caveat (Ironically well-trodden in the generally white critical responses to this play) that as a non-PoC I am limited in my ability to address just how accurate or effective Fairview is in tackling the issues mentioned, or the reality of these experiences. However, I can state with some confidence that Fairview is a radical production, which demand I confront my own assumptions and privileges, which I continue to question for some time afterwards.

Although Fairview seems to ultimately serve as a quite harrowing indictment of contemporary discourses on race, it does end on a note that might be considered redemptive, or at least points towards a hopeful future for those it seeks to advocate for, and for those who can assist too. At its heart it presents a choice, in a moment that I think will remain with all those present, and truly positions Fairview as a much-needed testament to the transformative power of theatre. 4.5/5

Fairview is currently showing until Thursday 23rd January 2020 at The Young Vic Theatre. To find out more about the production, visit here…