Three sisters lie broken and devastated, a body limp stage left, and the cry of an African song rings out as the final call of a martyr, Inua Ellams’ complete reconstruction of the Chekhov classic leaves a lot of very uncomfortable questions hanging over the stage. 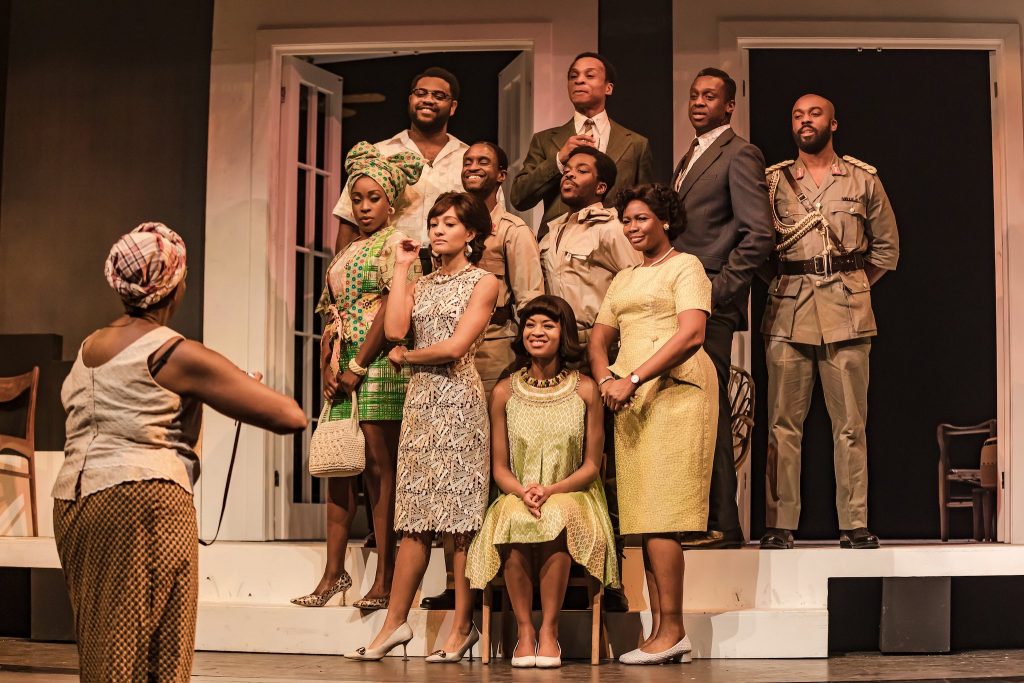 Ellams does a masterful job in stripping Chekhov back to what is compelling about his work and applying this to a devastatingly powerful story, which is often neglected by mainstream history. I have always found Chekhov’s grounding in late 19th century Russian life rather inaccessible, but Ellams leaves the inaccessibility behind and makes what is a very specific story, come across as relevant in its politics on division, ideas of neo-colonialism and questioning of definitions that colonialism was ever over in the first place.

I couldn’t help but feel that the way proxemics is used may have undermined the subtlety of the piece; a lack of exploration in movement makes a lot of the ideas put forward come across as very signposted. However, some brilliant moments thrive on what is not said.

Nadia Fall must be credited for creating an equally intricate and authentic world, into which we are thrown, and sometimes in a confronting, provocative way. And while there are moments when Fall tells and does not allow for some questions to go unanswered, it is mostly well constructed.

Unfortunately, the stellar performances from Racheal Ofori as Udo, whose bleak silence strikes hard and Tobi Bamtefa as Dimgba, lack a cohesion that comes down to a lack of defined physical characterisation and unimaginative stage dynamics. However, rhythm and timing in the dramaturgy of the piece are used to great effect and creates a strong sense of powerlessness in the looming tension of the piece.

Ellams’ insightful, perceptive powerful script is what makes this play as good as it is. The status battles which define the dialogue are built on by mostly high-quality acting but comes from a brilliant understanding of what we do when we are facing oblivion and the panic of human instinct, and Ellams brings this out magnificently.

It is a shame that the actors never allow themselves to grow into the context of their performance because on the whole, they are fantastic and the script gives them a great platform to show this. Underneath the outstanding design and brilliant integration of music and dance lurk a lack of dynamism and the innovative staging leaves a certain something to be desired, but then again, maybe this is a comment on the crippling tension of their lives. 3.5/5

Three Sisters is currently showing until Wednesday 19th February 2020 at the National Theatre. To find out more about the production, visit here…

« Previous post
I Wanna Be Yours @ The Bush Theatre Review
Next post »
Actor Kwami Odoom talks about starring in ‘Hunger’ currently showing at the Arcola Theatre!