Boris Johnson winning a winter election couldn’t have come at a better time for Mike Bartlett and his London debut of Snowflake at the Kiln Theatre. Aptly titled one might say to fit Bartlett’s flare for goading the political discourse du jour. Though generational tension bubbles away, the title doesn’t live up to the boomer vs millennial hostility one might have expected, if that’s what you’re after just log on to Twitter. 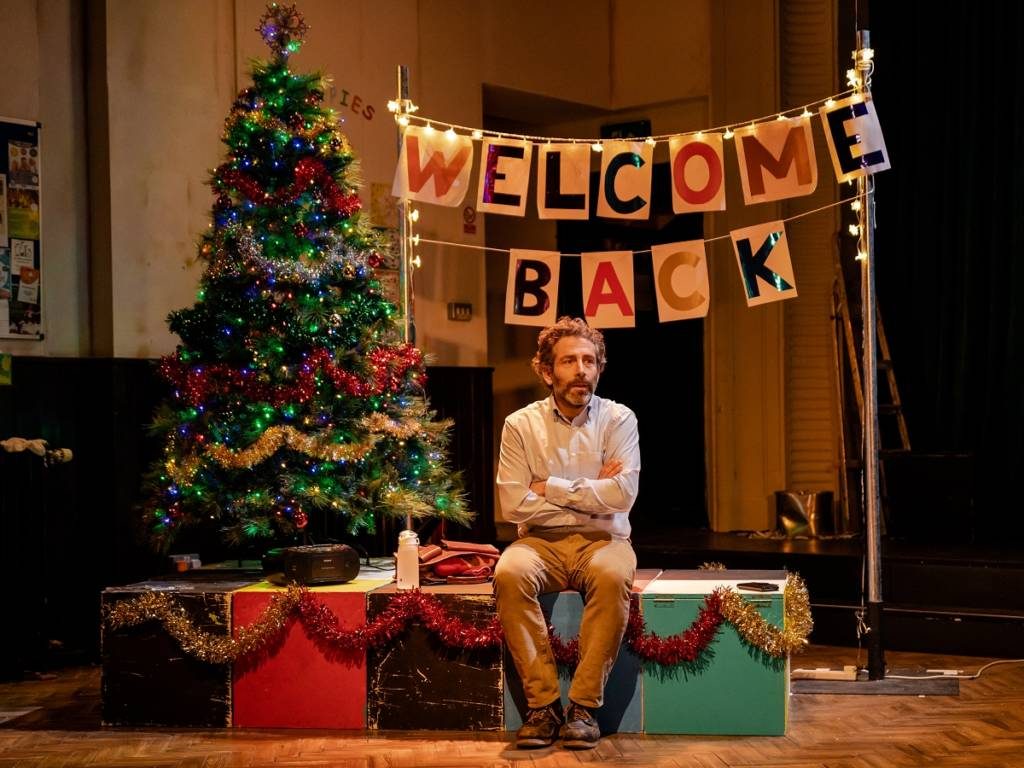 Instead of Twitter spats we have Widower, and Eurosceptic Andy (Eliot Levey) who has arranged a surprise ‘Welcome Home’ party at his local church hall for estranged daughter Maya (Ellen Robertson). He’s desperate to have her back and make amends but if only he could work out where it all went wrong things would be a lot easier for him.

Bartlett writes dialogue with such ease it makes you green-eyed. Though after Andy’s almost hour long monologue, the theatre bursts with relief when Natalie (Amber James) charges on to stage to close act one. James’s Natalie bounds with a metropolitan level headedness, a playful contrast to Levey’s hole digging, bumbling Andy. The pair make a delightful double act, with Natalie in role as a sort of ghost of Christmas present, probing Andy to question why Maya might have abruptly cut him off three years ago.

It’s often hard to imagine museum worker Andy being a leaver- with his curly mopped hair, chinos and thorough knowledge of ancient history, he’s hardly the pro-Brexit poster boy his dialogue sometimes mistakes him for.

There’s further question marks over the believability of  daughter Maya, who can only be summarised as stylish and sulky. She doesn’t feel as fleshed out as the other two characters and is more of an apparatus for serving the plot rather than an emotional linchpin to weld this family together. The tensions between the two are contrived, and do little to convince us that Maya isn’t an entitled, sanctimonious…snowflake.  The play glosses over the fact that generation divides have always, and will always, carve strains in family relationships- as is the very nature of family life!

Though the tone is more on the scale of a Radio Four comedy drama, there are a few good gags, particularly the Esther Rantzen, That’s Life! punchline.

True to his form, Bartlett offers arguments in dollops from both sides, though the difficulty with Brexit is that it can’t be reduced to just simply two angles. It’s interesting that Andy touches on sexual fluidity in one of his many monologues. Though it’s not just gender identity that has a free-flowing state, political beliefs too follow natural contours rather than fall to two unyielding binary options. If we are to get anywhere close to solving the Brexit nightmare, we all must challenge our biased stereotypes because those will never get us anywhere. 3/5

Snowflake is currently showing until Saturday 25th January 2020 at the Kiln Theatre. To find out more about the production, visit here…