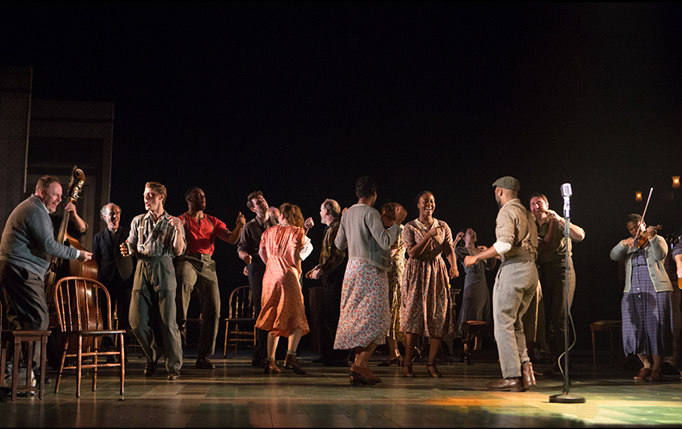 The story follows a community that’s really struggling. Living together in a local inn, Nick – the owner – holds the keys to this sanctuary. However, he owes money to the bank – too much money, and that’s not the only problem he’s facing. His son is drinking himself to death, his adopted daughter is soon to give birth to a child she didn’t particularly want, and his wife struggles with her poor health and loss of memory. Still, life must go on – against all the odds.

McPherson’s script does well to highlight the important undertones of Bob Dylan’s music. In the script there are no moments of showing off; it’s simple authentic storytelling. If you mash this with fantastic performers, you get a show that’s a highlight from start to finish.

The ensemble shine, coming together to create a chorus of joy and heartbreak. There’s a real energy, which radiates around the auditorium. It’s still the track Tight Connection to my Heart that really pulls on your heartstrings, but this time it’s Gloria Obianyo that delivers a moment that packs a real emotional punch. It’s soulful and so evocative.

Once again, this is a highlight of current London Theatre, and a show not to be missed. 5/5

Girl from the North Country is currently showing until Saturday 1st February 2020 at the Gielgud Theatre. To find out more about the production, visit here…